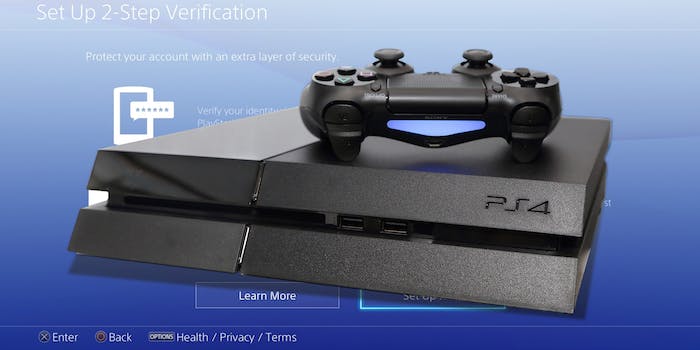 How to enable 2-factor authentication on PlayStation 4

Sony today enabled two-step authentication for the PlayStation 4 console, and turning it on is a really good idea.

Using two-step authentication for any online account is smart. You might already be using it for online banking, social media accounts, and email. Extra security for your PS4 makes sense, especially when you consider the massive PlayStation Network hack of 2011. Many users have billing information saved on the network.

If typing in a code sent to your mobile device doesn’t sound like too much of a hassle for extra security, here’s how to enable two-factor authentication on the PS4.

6) Select “Set Up Now” on the Set Up 2-step verification screen. On the following screen, enter your phone number, after which you’ll receive your first text message from PSN, and activate the service.

Now that you’ve seen how easy the process is, consider enabling two-factor authentication for your PS4. A little extra security never hurts.