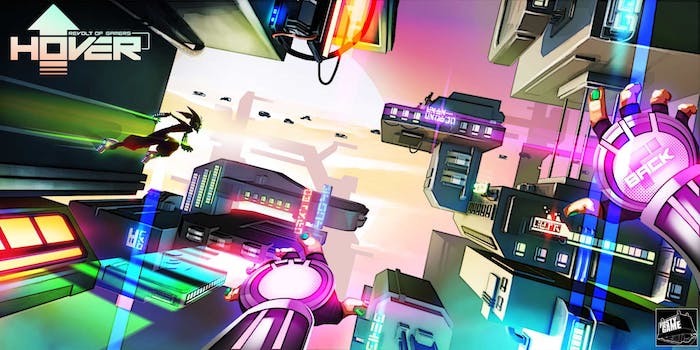 And it's beat its fundraising goal in just two days.

Hover Revolt of Gamers, by French developer Midgar Studio, hit more than $40,000 in contributions earlier today, easily breaking its $38,000 goal. Just based on the company’s promotional video, it’s easy to see why gamers are so enthusiastic. The game focuses around a group of skaters in a vibrantly futuristic world either competing against rival gangs or running away from the police.

The player traverses in first person, finding paths to escape potential dangers. Since players can wall ride, verticality plays a major role in giving the player multiple avenues for escape. Here, elements of Jet Set Radio set in where largely exaggerated jumps that can give players a grandiose sense of freedom in movement.

Scoring in the game is done similar to the Tony Hawk’s Pro Skater series, gaining multipliers from grinding and continuing tricks for the longest possible combination.

Players can infinitely wall jump, grind, and even ride atop of flying cars to reach their end goal at breakneck speeds. Hover Revolt of Gamers also plans to have a robust multiplayer mode in which gamers can challenge each other to races and other events on the fly.

With 28 days still to go in the Kickstarter, it looks like the company will easily reach its next stretch goal of $60,000, which it will use to bring on Jet Set Radio composer Hideki Naganuma. The top stretch goal of $100,000 dollars will yield a Wii U version of the game.

Current alpha footage of the game looks rather impressive, and even more remarkable is the fact that it was made in four months by three people with virtually no budget. It’s quite the talented trio.