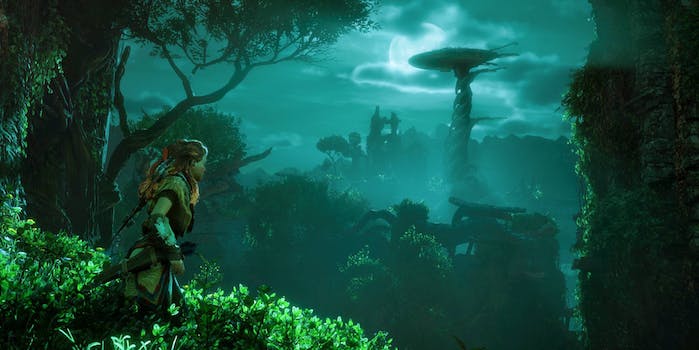 Review: Horizon Zero Dawn embraces the thrill of the hunt

Make your way through an unforgiving world.

Guerrilla Games’ latest adventure Horizon Zero Dawn should be an easy sell for fans of science-fiction and high fantasy.

The story is set in the distant future, where humanity has reverted to its most primal state, cursing the technology-worshiping ways of the “old ones.” A terrible tragedy befell our society, and now warring tribes roam the lands wielding augmented bows and spears. Ancient bunkers lie deep underground, offering only hints as to what happened on our planet, while broken cars and buildings are cloaked by vines, overtaken by the natural splendor of the wilderness.

Aloy, our red-headed heroine, finds herself excommunicated by the tribe to which she was born. Members of the Nora won’t speak to outcasts, leaving Aloy just one friend: her stern mentor, Rost. A great mystery surrounds the fiery huntress, exiled because of her birth mother’s identity. The opening hour gets players up to speed on the customs of this matriarchal society and fleshes out Aloy’s origin. Alone in the wilderness, the young girl must prepare for The Proving, a rite of passage that will earn her a place back among her people. From there, she sets out on a grand quest to uncover the answers hidden in this dangerous new world.

Horizon Zero Dawn’s story feels intriguing and unique — even before the robot dinosaurs are introduced. Following the fall of modern mankind, hostile machines in familiar shapes dominate the land. Aloy comes across mechanized creatures resembling deer and wolves early on, but there are larger threats later, like a T-Rex with mounted turrets and rocket launchers. The design of each monster is strikingly unique, making for an entertaining errand to chase down and discover all the different species. Luckily, Aloy is well-prepared for these tense combat situations, and she wields an arsenal of traps and weapons to take on nearly any challenge thrown her way. 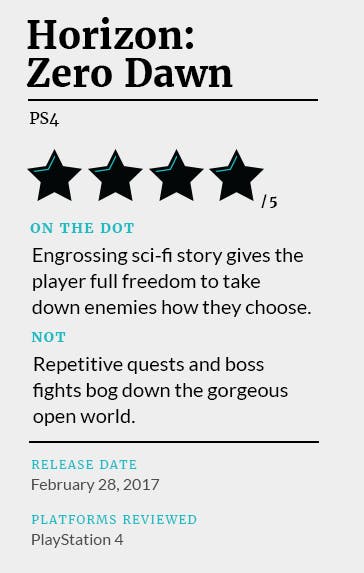 All the action takes place within a massive map, and after a mostly linear opening sequence, players immediately have the freedom to go nearly anywhere. Horizon Zero Dawn’s open world is not segmented by the story, but a journey too far from the nearest waypoint often leads to over-leveled enemies that can crush Aloy in one hit. There are plenty of hidden secrets and items to comb over and collect, with massive, towering monsters serving as information towers that can dump new data into players’ quest logs. Climbing up each of these beasts is a task in itself, allowing Aloy to take in the magnificent surrounding vistas.

Horizon’s action-oriented gameplay excels in situations where the player is given ample time to plot the proper course ahead. Most encounters begin with the player shrouded in tall grass, presented with the option to survey enemies and environments. Aloy can creep along, plant wires and explosives at choke points, and pick off individual threats with well-timed headshots. Though it may not be a pure stealth experience, Horizon confidently handles the option to remain undetected, at least in naturally-occurring confrontations in the open world.

Choosing which battles to rush into headfirst and which to carefully control from a distance is the key to survival, as the AI is responsive to an intimidating degree. Enemies can bypass Aloy’s traps if they are alert and rush after her as she tries to make an escape. Though stealth is presented as only one option to take down your foes, it really is an integral part of any combat strategy. However, the emphasis on remaining undetected becomes a nuisance when roaming to a new objective, as enemies swarm Aloy even when she simply minds her own business. Battles with multiple foes can be frustrating, as the player will take substantially more damage than they can dish out. Thankfully, the extent to which players can customize Aloy’s combat prowess and equipment is impressive. Horizon features a branching skill-tree that builds on sneaking, melee damage, and carrying capacity while every available weapon and outfit can be modified. Each weapon can also use different types of ammo, ranging from fiery explosives to arrows that turn machines against each other. Thanks to the Focus, a mysterious tool that lets Aloy inspect certain aspects of the world, each machine’s weakness can be highlighted during battle. After doing so, players can focus on removing components from the enemy and targeting weak spots.

The freedom afforded to individual play style adds a bevy of approaches to each and every different enemy you come across. Countless hours can be lost in the wilderness tracking specific prey to farm resources for upgrades. The traps and tripwires Aloy uses to disable and weaken opponents from a distance are remarkably effective when aimlessly wandering the rolling hills and getting the drop on unsuspecting prey, but they can’t elevate the action in standard combat encounters.

Due to this, unscripted fights tend to be much more enjoyable than the set-pieces during Horizon Zero Dawn’s story. Cinematic boss battles quickly start to become derivative, throwing more and more enemies of varying sizes at the player rather than engaging with any innovative strategies outside of a few big moments. 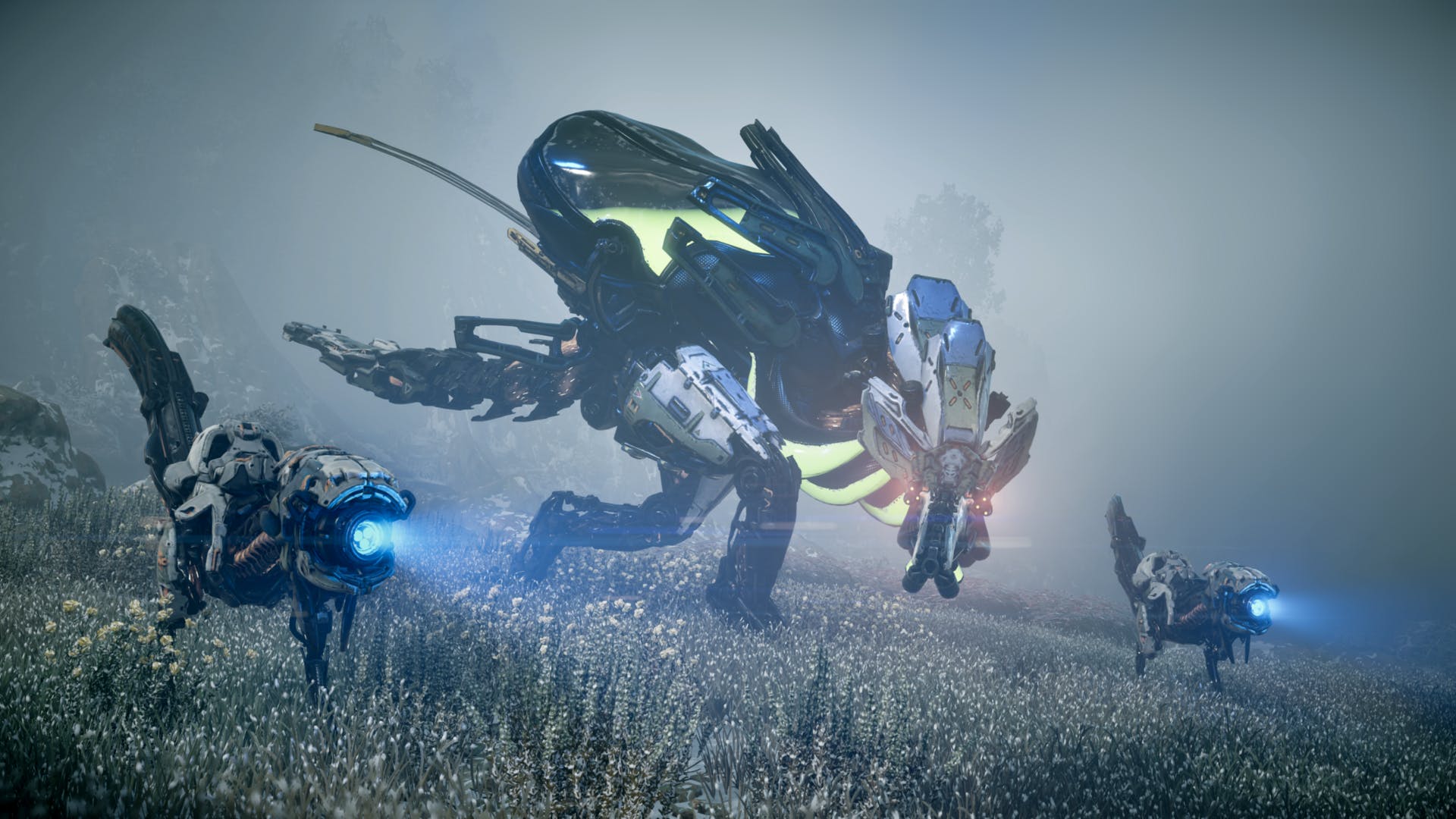 Gameplay feels best when removed from any concrete objective, which is a shame, considering the strength of the central narrative. Horizon’s plot isn’t afraid to start answering questions early on, and effectively layers twists and turns throughout the 30-hour plot. Aloy herself is written very well, compelling both as a fierce warrior and compassionate peacekeeper. Unfortunately, most side quests repeat the same familiar pattern, as Aloy is tasked with journeying out to recover someone or something from the jaws of danger. The main story does introduce several recurring characters who give players a reason to care about the monotonous missions, despite their lack of variety.

Uncovering the mystery of why the world seems like it has turned back thousands of years and where the monstrous mechanical hordes came from, and how both relate to Aloy, is a continuously engaging plot to follow. Horizon touches on the politics of this new world, as well as several personal relationships that flesh out the major characters. The story leaves room for a sequel down the road, and it is certainly a world worth revisiting. The open-world sensations of Horizon Zero Dawn are some of the best of the current console generation. Climbing snow-capped mountains and crawling through verdant valleys never fails to be as exciting. This apocalyptic wasteland feels remarkably dynamic, with randomized characters and enemies roaming the world and creating emergent encounters.

Though Horizon doesn’t represent a revolution in open-world adventures, it borrows heavily from past success stories and elevates the genre to a beautiful new standard.

Disclosure: A PS4 copy of Horizon Zero Dawn was provided by Sony for review.