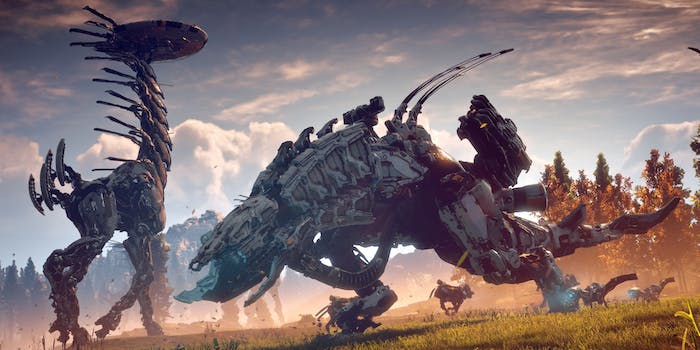 Discovering the depth and beauty of Horizon Zero Dawn

This is not the game we thought it was. It's even better.

Horizon Zero Dawn is so much more than a gorgeous world filled with awe-inspiring, giant robots.

Horizon Zero Dawn is set in the post post-apocalypse, a thousand years after the collapse of humanity. Machines have inherited the earth, but they are not remorseless killers tracking down the remnants of the human race, as is usually the case in these kinds of stories.

Instead the machines have evolved into forms that strongly resemble animal species. The machines are not separated from nature of account of being artificially created in silicon, versus born naturally as flesh and blood. The machines exist as part of a complex ecosystem that is woven tightly into the natural world.

Aloy, the hero of the story, is an outcast from the primitive human society that has grown out of the wreckage of the old world. Horizon Zero Dawn is about her quest to discover why she is outcast, and what brought humanity to its end. 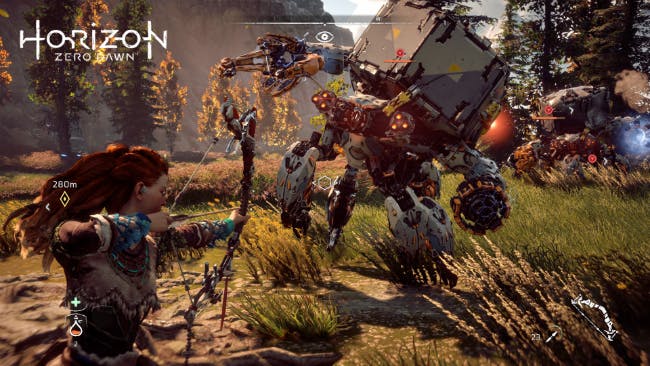 During my hands-on demo session with Horizon Zero Dawn on Tuesday, I was presented with a challenging action game. Playing as Aloy, I tracked machines called Watchers by hiding in tall grasses and executed them with stealth takedowns.

But Horizon Zero Dawn also has loot, crafting systems, merchants, BioWare-type dialogue wheels, and weapons and armor whose rarity is color-coded in the familiar green/blue/purple scheme that’s an integral part of practically every RPG on the marketplace.

That Horizon Zero Dawn is as much an RPG as an action game shouldn’t come as a surprise considering the pedigree of its lead writer, none other than John Gonzalez, lead writer on Fallout: New Vegas, the post-nuclear apocalypse RPG that followed Fallout 3.

And in the minds of some critics and fans, New Vegas did a superior job compared to Fallout 3 of creating an immersive storytelling experience in which the player’s actions felt truly consequential in shaping the world around them.

I spoke with Gonzalez about the creative inspirations behind the world of Horizon Zero Dawn, the degree to which players can expect to change the game world via their role-playing choices, and how Horizon Zero Dawn fits into the larger genre of man vs. machine sci-fi stories.

Horizon Zero Dawn will be released exclusively for the PlayStation 4 on Feb. 28, 2017. 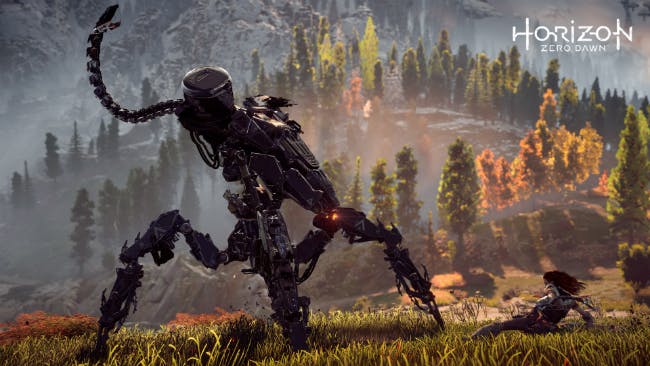 Are dialogue choices in Horizon Zero Dawn consequential? This is an RPG, after all.

John Gonzalez: There are consequential choices that are part of the interactive dialogue system, but I think that a lot of our focus has been on deepening the experience, deepening the engagement for the people who really want to have that role playing experience.

There are certainly a lot of elements that are also expressive, there are places where there are very different choices that you make which are kind of a way of empathizing with Aloy and how she might respond to that situation.

And then there are also investigative functions that it has, of being able to find out more about the people, and the cultures, and the quests that you’re on.

When I say “consequential” I mean something akin to a morality system. The way Aloy speaks to somebody in a village, like they’re going to remember if she’s rude to them and there will be consequences for that later.

There are choices that you make that can have an impact down the road, but I think that one of the things we do is we tried to actually stay away from gamifying the choices a lot. We were really interested in making them as expressive as possible. It does have consequences, but I think it’s a way of engaging with the fiction, more.

What were your cultural references for the human society depicted in the game?

I would say that they’re really far reaching. There wasn’t any kind of particular culture that was just the reference. I think that the art team’s design really began with a kind of survey of world cultures, looking for universal patterns, how different peoples interacted with their environment, the resources that were available, how that shaped the kind of clothing or technologies that they would use.

There are a lot of people who ended up reading Guns, Germs, and Steel as we were working on this project. We try to take a pretty exacting kind of look at what would it mean for people to be adapting to this world.

So there are things that I think in the world, they may look like cultures from our world, but we think of that as being kind of a convergent evolution aspect. It’s like the same kind of solutions were thought up by new groups of people. 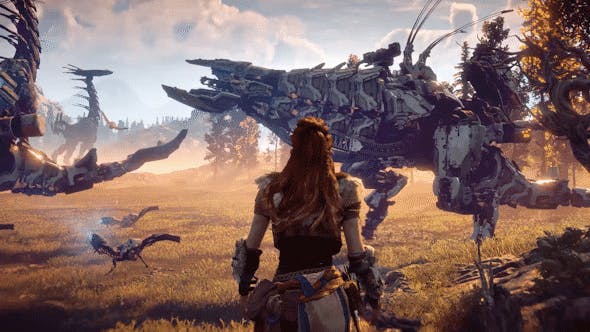 Did you drawn from any references in fiction, when you designed this world? Not just the human society within the world, but the world as a whole?

I can’t think of anything that’s precisely like this, or that this was patterned on. In developing the story and the world, it was something that didn’t feel like it fit a familiar mold.

I think that there are experiences of awe or majesty in the world, in that way sort of touch on maybe some of the experiences you felt in something like Jurassic Park, for example. Perhaps Avatar.

I ask because there’s a lot of man vs. machine fiction. It’s very ensconced in sci-fi. Terminator. Matrix. What sets Horizon Zero Dawn as unique within this realm of fiction? That it takes place a thousand years after the reign of the machines began? That there is an ecology within the machine world? There’s something that does feel genuinely different about this take.

I was the lead writer on Fallout: New Vegas, that’s obviously inhabiting the previous culture as the kind of junkheap of all the savagery, right? This is really different. This is a new world that’s grown on the grave of the old world, and I do think that has a really different resonance.

For Aloy, this ancient, mysterious past is basically the grave of the world that we had, and there’s a kind of sorrow in that I think for us, what exactly is it that went wrong, you know? And wanting to find that out, to understand it. Her past, in a sense, is our future. Still where we’re headed.

I think, though, that really so much of the reference or inspiration was actually in nonfiction. I mean, in just taking a look at what futurists have written about where things might be going. Again, things like Guns, Germs, and Steel. Another Jared Diamond book, Collapse. Projections for what’s going to be going on in robotics. Things having to do with kind of deep ecology. I think we really drew references from all over the map.

All the machines have a very biological look and feel to them. Is there a biological-type structure underneath the machines? Do they have skeletons and musculatures?

No, they don’t. There is a kind of synthetic fiber that is very similar to muscle. That’s one of the components you’ll actually discover as you’re harvesting components from these machines. But the morphologies, the shapes of them, and the fact that those are so similar to animals, is actually in a way one of the mysteries of the world. Why is it that the machines look like this?

When you were designing the machines, did you imagine the evolution of the machines and how they arrived at the forms we see in the game?

Everything about the machines and what they do, how they behave, how they appear, definitely has a kind of fictional underpinning that was thought through.