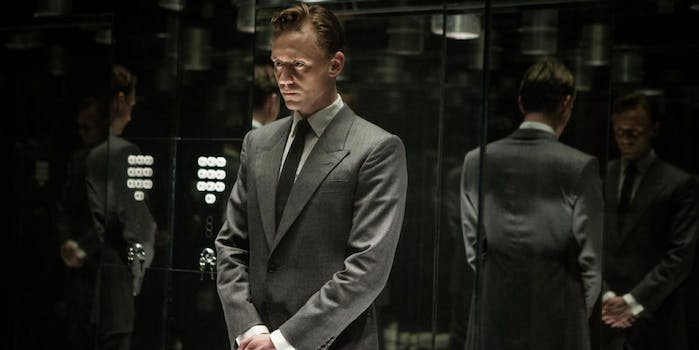 “The warning in High Rise is about replacing nature with technology,” said Hiddleston. “Which I find so fascinating because I don’t know how many people are filming this right now. So,” he added wryly, “don’t feel implicated by what I’m about to read.”

There were indeed many cellphone cameras aimed in Hiddleston’s direction, including one belonging to director Ben Wheatley. He filmed from the sidelines as Hiddleston read aloud from a 1978 interview with J.G. Ballard, in which the author predicted selfies and online video streaming 30 years in advance: “The transformation of the home into the TV Studio is the creation of a new kind of reality,” he said, theorizing that people would begin with “endlessly photographing themselves” as they became acclimatized to being surrounded by cameras.

“Of course, the bedroom applications are obvious. But I think they’ll go beyond that to the point where each of us will be at the center of a sort of non-stop serial.

I can see a sort of huge extension of video live material which will be accessible at the press of a button… you’ll be able to dial a visual input of say, all the newsreel material filmed yesterday in Los Angeles —  I’m talking about somebody living in a London suburb.”

As an A-list celebrity who is constantly filmed and photographed wherever he goes, it’s easy to see why Hiddleston would home in on this quote. However, the warning message of Wheatley’s High Rise adaptation—if there is one—is more subtle than a direct comment about our reliance on technology.

Like Ballard’s novel, Wheatley’s vision of High Rise takes place in a luxury apartment block in the 1970s, where every amenity is provided for the building’s residents. Hiddleston plays Dr. Robert Laing, a young doctor who is trying to make a fresh start on life by joining the building’s isolated society of yuppies and social climbers. The community’s darker side makes itself known when Laing meets with the architect (Jeremy Irons, playing to type), who explains that the building is a social experiment.

Intentionally cut off from the rest of the world, the High Rise lifestyle slowly begins to decay. As the electricity sputters out and the internal supermarket runs out of food, the community gradually dissolves into Lord of the Flies chaos, interspersed with Judge Dredd-like shots of the building’s retrofuturistic concrete exterior. It’s a slow burn, but the film’s opening scene gives us a gruesome taste of things to come: a flash-forward to Laing sitting calmly on his balcony, eating someone’s pet dog.

The claustrophobic setting and stylishly surreal tone invite comparisons to Bong Joon-ho’s Snowpiercer, which saw Chris Evans lead a rebellion among the post-apocalyptic remnants of humanity. Set onboard a train where different tiers of society live in separate carriages, Snowpiercer represented a more overt political message about capitalism and climate change. High Rise is rather more oblique, to the point where it may be more entertaining if you avoid examining its social commentary.

While High Rise is beautifully shot and boasts a morbidly witty script, it’s difficult to tell where it stands as a social satire—if it is one. The upper-class characters are universally portrayed as venal and monstrous, but Laing’s social circle of hard-drinking young professionals are often just as bad. With its all-white cast and focus on 30-something cocktail parties gone wild, High Rise‘s main theme is one of pure, atavistic anarchy.

Contrary to popular Hollywood belief, a narrative doesn’t need heroes and villains to succeed. But for all its stylish execution, from the cast’s dark comic timing its pitch-perfect 1970s aesthetic, High Rise might actually have been improved by taking a leaf from its more mainstream forbears.

With varying degrees of realism, dystopian films like Children of Men, Snowpiercer and Brazil offer lasting commentary on our own world. High Rise doesn’t quite stand up to the same scrutiny. Despite being a success in almost every other regard, it fails to illustrate why Laing and his neighbors would choose to remain trapped inside their allegorical high-rise Hell, brutalizing each other and eating dog for dinner.