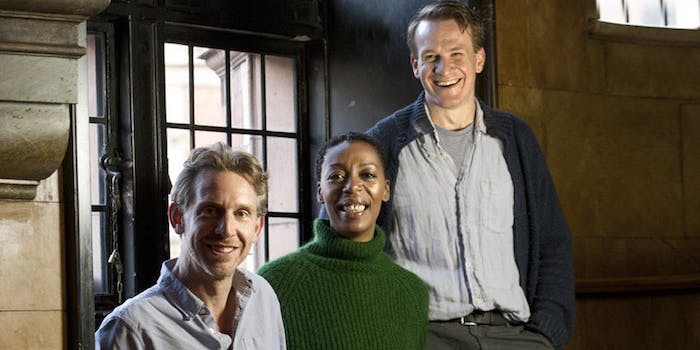 In 'Harry Potter and the Cursed Child,' Hermione is black, Harry is blond, and Ron is no longer a redhead.

Within minutes of their announcement on Twitter, the new Harry, Ron and Hermione were already making waves throughout Harry Potter fandom.

Daily Mail reporter Baz Bamigboye revealed the cast for the hotly anticipated stage play Harry Potter and the Cursed Child on Sunday night, sharing the news that Harry would be played by Jamie Parker, Hermione by Noma Dumezweni, and Ron by Paul Thornley. They will depict middle-aged versions of the characters, set 19 years after Harry Potter and the Deathly Hallows.

Parker, Dumezweni and Thornley look rather different from their characters’ previous incarnations. Harry now has pale brown hair, Hermione is black, and Ron, crucially, is no longer a redhead. Unsurprisingly, Hermione was the character who provoked the most enthusiastic reaction online.

Many fans have always imagined Hermione as a woman of color, and the casting of Noma Dumezweni adds more legitimacy to this popular headcanon. This casting choice also sends a strong message to future productions of the play, once Harry Potter and the Cursed Child spreads beyond its debut run in London’s West End. Hollywood may still be conservative when it comes to casting decisions, but theater productions have a lot more leeway to cast a more diverse range of actors in seemingly familiar roles.

Tbh new Hermione is black, Harry looks like Ron, when I was cast ppl complained about my HAIR & it is people's❤️ NOT their looks that matter

Some of my favourite Hermione fanarts next to our new Hermione! pic.twitter.com/80bIkcLBMJ

J.K. Rowling threw her full support behind the casting on Twitter, pointing out what fans have been saying for years: Hermione’s race is ambiguous in the books, as is the case for many of the main characters in the Harry Potter series. If only this attitude had materialized during the casting process for Fantastic Beasts and Where to Find Them.