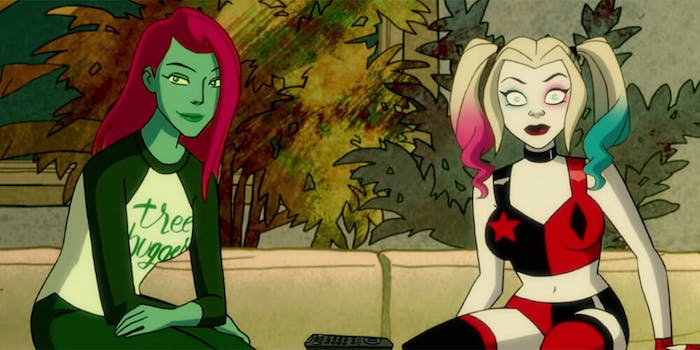 The showrunners weighed in on Harley Quinn's love life in season 1.

Harley Quinn is canonically queer, but like many high-profile Marvel and DC characters—Deadpool, Wonder Woman and Loki, to name a few—her sexuality isn’t necessarily public knowledge among mainstream audiences. So there were some questions over how she would be portrayed in the new DC Universe animated show, Harley Quinn. Would Harley and Poison Ivy, her sometimes-girlfriend in the comics, end up in a relationship after Harley breaks up with the Joker?

“Without giving too much away, that was something we wanted to explore,” the show’s co-creator Justin Halpern told Comic Book Resources in an interview published Wednesday. “I won’t tell you what happens. But yeah, that’s certainly was of interest to us.”

“It was important for us in Season 1 to not get her out of a relationship and then suddenly get her into another one. We wanted it to just be about this self discovery, and not self discovery in terms of how I validate myself through other people. In the first season, we sort of stay away from too much of her being romantically involved in anything.”

Co-showrunner Patrick Schumacker added that season 1 was about “setting the table” for the rest of the show, implying that a Harley/Ivy relationship could arrive in later seasons.

Given that Harley’s season 1 arc is about her regaining her independence after leaving an abusive relationship, you can see where they’re coming from. Ivy plays the role of supportive friend, and for most of the season, it really does feel like it would be too soon for Harley to get into a new relationship. Meanwhile, Ivy is learning to depend on her friends and open up emotionally.

That said, some fans are vocally unhappy about the revelation that season 1 probably won’t include a Harley/Ivy romance. The showrunners telling viewers to “be patient for future seasons” makes sense in the context of the story, but people are used to hearing this kind of thing from creators who queerbait their audiences. The fact that this conversation is happening before the show’s premiere illustrates how strongly fans feel about the topic, tying into the popularity of Harley Quinn as a relatably flawed antihero who, unlike Batwoman or Wonder Woman, isn’t intended as a traditional role model.