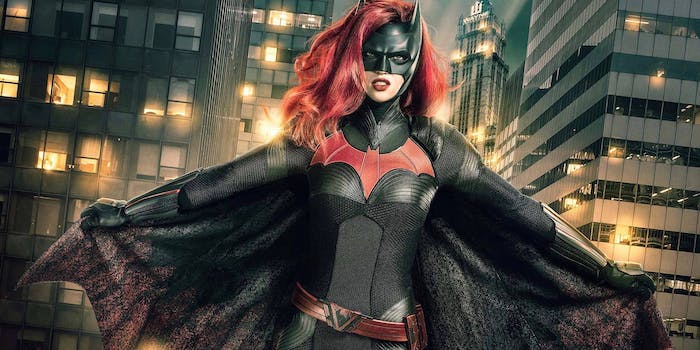 Ruby Rose makes her mark on the Arrowverse as Batwoman.

Kate Kane (Ruby Rose) is finally making her solo debut in the Arrowverse after her first appearance in the Elseworld crossover last year. But amid a fascinating villain and worldbuilding, Batwoman still has some kinks to work through as it struggles to get out of the Batshadow hanging over it.

Batman does not appear at all in the CW’s Batwoman series premiere. The Caped Crusader split town three years before the start of Batwoman under mysterious circumstances, but his absence looms large in Gotham. It’s almost akin to the beginning of Supergirl, which constantly alluded to Superman; as with Superman and Supergirl, Batman and Batwoman are also cousins. The major difference is that while Supergirl initially refrained from referring to Superman by name—the euphemism of “my cousin” was used a lot—Batwoman doesn’t shy away from the name of Batman and Bruce Wayne. (Supergirl eventually cast Tyler Hoechlin to play Superman.)

To be fair, it’s kind of hard to ignore Batman completely in Gotham. Even three years after he vanished, Gotham still keeps the Bat-signal lit while an elite security force called The Crows led by Kate’s father Jacob (Dougray Scott) steps in to keep the city safe. But when the series starts, it’s a bit difficult to separate the two because they’re so linked, although there are enough pieces for Kate to eventually break out of her cousin’s shadow.

Despite their similarities such as a childhood family tragedy and their relative privilege in life, Kate isn’t just a mirror copy of Bruce, although pieces of her backstory are familiar—at least in the sense that we’ve seen elements of them in superhero stories before.

Kate lost her sister and mother in a car crash and, for years, blamed Batman for not saving them along with her. She still has her father, who eventually remarried. Kate spent 15 years away from Gotham training to join The Crows after being expelled from the Academy, but it’s still not enough. And a new and mysterious villain’s arrival in the city, along with the capture of someone from Kate’s past, sparks her return to Gotham. The first iteration of Batwoman’s costume is even based on a version of Batman’s outfit (which differs from the version we ultimately saw in Elseworlds), so similar that people mistake her for Batman the first time they see her in action.

She isn’t a chipper or optimistic superhero. She’s shaped by her trauma, both from losing her family and her father pushing her away, and when she discovers the truth about Batman, her entire worldview shatters. She’s openly gay, which both has her unafraid to be herself and also leads to a harsh world that has yet to catch up with her. She’s stubborn and driven and isn’t about to let something like advanced technology stop her from her mission. But she’s also instantly engaging as our entryway into this version of Gotham.

Oftentimes in the pilot, Batwoman is upstaged by Alice (Rachel Skarsten), the new villain in Gotham. With both Alice and her minions stylized after characters and creatures in Alice in Wonderland, Alice brings fear but also a gleeful, almost Joker-like chaos to Gotham. While we might still be largely in the dark about what Alice’s bigger plan is or her fixation on Kate, you can’t help but be drawn in.

Some of the dialogue is incredibly cheesy and even groan-inducing, and not all of the action scenes gel together just yet. Batwoman has a lot going for it, including the ability to build on the relationship between its main hero and villain and delving into how Kate Kane can forge her own identity as Batwoman, with Lucius Fox’s son Luke (Camrus Johnson) working as a connector between the old and the new.

Batwoman has all of the pieces to forge her own path, but like Batwoman herself, you have to get through a few test runs before you really get the hang of it.