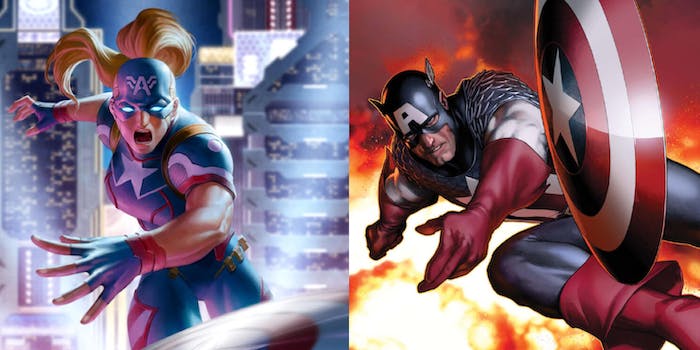 Marvel confirms that Captain America is a woman in the future

The future is female.

Captain America is a staple of Marvel comics.

In the Marvel Cinematic Universe, Chris Evans’ iconic portrayal made Cap a household name. Comic book lovers, however, have long been familiar with the patriotic hero. He’s gone through dozens of iterations through the years, from the original Steve Rogers to Isaiah Bradley, Jeffrey Mace, and even James Buchanan Barnes. Now, Marvel has recently confirmed that the future Captain America is female.

All things must come to an end, and Steve Rogers is no exception. We always knew Rogers would pass the mantle on, and over the years he’s done so a number of times. In the MCU, the title was passed on to Sam Wilson, or Falcon. His future as Cap is set to be explored in the Disney+ series The Falcon and the Winter Soldier. While the star-spangled shield has passed hands a number of times before, it has never gone to a woman. At least, not in Earth-616.

The Marvel comics universe has a number of alternate realities and timelines. In some of these, the title of Captain America has been passed on to a woman, but almost always due to dire circumstances. In one, Peggy Carter participates in Project: Rebirth and takes up the shield. Another timeline places Samantha Wilson—a gender-bent version of Sam Wilson—in the role. Marvel’s recent announcement marks the first time a woman will take up the title of Captain America in the Marvel comic’s main timeline.

The 80th anniversary of Marvel comics called for something new, and time travel—a very familiar practice in comics—was the perfect choice. Marvel 2099 sent Miguel O’Hara, a future version of Spider-Man, back to present-day. There, he confirmed the identity of Captain America in his timeline: Roberta Mendez. O’Hara traveled to the past to recruit help, indicating that Mendez and the other heroes of the future might be in trouble. Hopefully, we’ll see some of our favorite present-day heroes head to the future to assist.

We’ve seen more comic books go in this direction in recent years. Comics used to be dominated by straight white men—just like the rest of the world—but that’s changing. Now, comics are evolving to better represent the world we live in. A young Black woman became Ironheart in 2015, Kamala Khan became Marvel’s first Muslim character to headline her own series in 2014, and Miles Morales hit the big screen as Spider-Man in 2018. Now, we are looking at a future in which one of Marvel’s most prominent heroes is a woman, and we can’t wait.