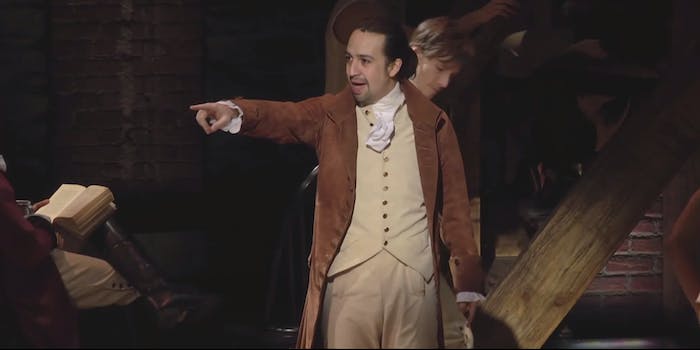 Maybe we should put Lin-Manuel Miranda's face on the $10 bill.

Since it first opened off-Broadway last year to rave reviews, sellout crowds, and lines around blocks, Hamilton has been a success like nothing the Great White Way has seen lately—possibly because it’s anything but white.

The life of Treasury Secretary Alexander Hamilton might seem like an odd subject to excite people this much. But today, the hip-hop infused story of “the $10 founding father” finally arrived on the Internet, with NPR streaming the Broadway cast recording for the first time—and #Hamiltunes promptly topped U.S. trending topics on Twitter, as ecstatic musical lovers celebrated.

Good morning.
Now usually I don't do this, but go ahead @NPR and break 'em off with a first listen: http://t.co/i4EcEcUcI0

me: so uh hamilton dropped early
roommate: THAT'S why you screamed and woke me up#hamiltunes

Hamilton is ostensibly about the founding fathers, a kind of 1776 for millennials. But with a cast almost totally comprised of actors of color—including show creator Lin-Manuel Miranda in the lead role—this version of the men who made America great is a re-appropriation of an American dream that has all too often uplifted only white men at the expense of everyone else.

Instead of that whitewashed American dream, Hamilton is a rich, subversive deconstruction of colonial myths, rooted in hip-hop and Miranda’s own musical influences, from vintage jazz to R&B to Sondheim. You can hear all of them in the showstopping early number “My Shot,” in which Hamilton introduces himself. Miranda spent a full year writing the song.

down for the count and drowning in #Hamiltunes

The political elements speak for themselves, with lines like “If you stand for nothing, Burr, what’ll you fall for?” and constant parallels between the 20-something founding fathers who “never thought [they’d] live past twenty” and the young men of color currently portraying them.

NPR describes Hamilton as “a musical animated by the most popular music of the past 30 years, which casts the Founding Fathers as a crew of skirt-chasing, workaholic, competitive twenty-somethings with mile-high ambitions and everything to prove.”

"black and white soldiers wonder alike if this really means freedom…." "not yet." is commentary even needed? #Hamiltunes #2015problems

"Don't modulate the key and then not debate with me!" STOOOPPPPPP! #Hamiltunes

The combined effect of music, history, and the shadow of contemporary politics is truly revolutionary. The end result is a play that seems to shout from the past that #BlackLivesMatter. Following Viola Davis’ history-making Emmy win and speech on Sunday, today’s arrival of the Hamilton soundtrack feels as timely as everything else about the show.

Pretty sure what Rent was to my generation, Hamilton will be 1000x more for the next several generations #Hamiltunes

If that’s the case, all we can say is bring on the season of love.