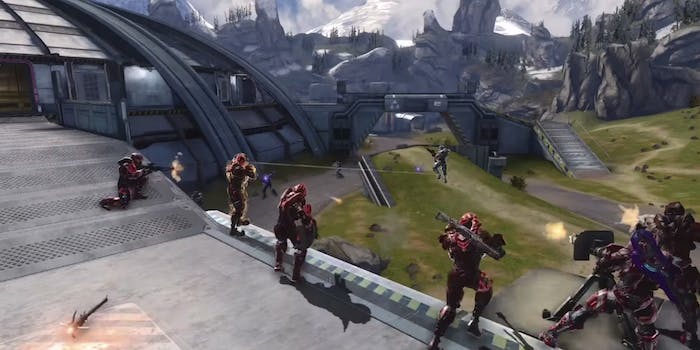 Hell hath no fury like a North American PC gamer locked out of a multiplayer game that was not designed for them. Thus, enter the modders.

Microsoft in late March announced Halo Online, a free-to-play multiplayer shooter modeled after Halo 3 that was designed solely for Russian PC users. This didn’t sit well with PC gamers outside of Russia who wanted to try the game. Now, Microsoft has issued a Digital Millenium Copyright Act (DMCA) claim against file-hosting service Github, asking the site to remove a game launcher that let people try a stolen alpha version of Halo Online.

A launcher is an executable file that immediately loads the player into the game. Modders created a launcher for the early alpha version of Halo Online shortly after it leaked. The modders in possession of both the Halo Online build and the launcher code are now spreading copies of the software far and wide to neuter the threat of further DMCA claims by Microsoft.

At issue is the fact that Microsoft never released Halo 3—the Xbox 360 title on which Halo Online is based—for its diehard audience of PC gamers. Halo: Combat Evolved and Halo 2 were originally released as Xbox exclusives, with PC versions following several years after each exclusive release.

Because Halo Online is based heavily on Halo 3‘s code, some members of the PC modding community considered pirating Halo Online to be the next best thing to getting an official PC release of Halo 3.

Modders are justifying their actions based on the fact that Halo Online is a free-to-play game.

“As someone involved in game development,” Neoshadow42, part of the team of modders breaking into Halo Online, told TorrentFreak, “I’m sympathetic with some developers when it comes to copyright issues. This is different though, in my opinion.”

“The game was going to be free in the first place,” Neoshadow42 continued. “The PC audience has been screaming for Halo 3 for years and years, and we saw the chance with this leak. The fact that we could, in theory, bring the game that everyone wants, without the added on stuff that would ruin the game, that’s something we’d be proud of.”

By “added-on stuff,” Neoshadow42 means pay-to-win content. Free-to-play games make money by charging players for items purchased with real-world currency. Usually, these items are purely cosmetic, like clothing or other decorations. In some cases, like in Battlefield Play4Free, players have to purchase access to better weapons and gear.

The modders responsible for the theft and exploration of the early alpha build of Halo Online are also justifying their work as an investigation into whether Halo Online could feature pay-to-win mechanics.

“We of course still don’t know 100% what items are purchasable with real money,” Woovie, another member of the modder team, told TorrentFreak, “but it would appear at first glance to have pay-to-win potential. We also of course want to play this game, which as far as we see, is a Russian market only game.”

Microsoft appears to have already lost its battle to keep non-Russian gamers away from Halo Online. Meanwhile, the company has not announced any plans to bring the game to North American markets.