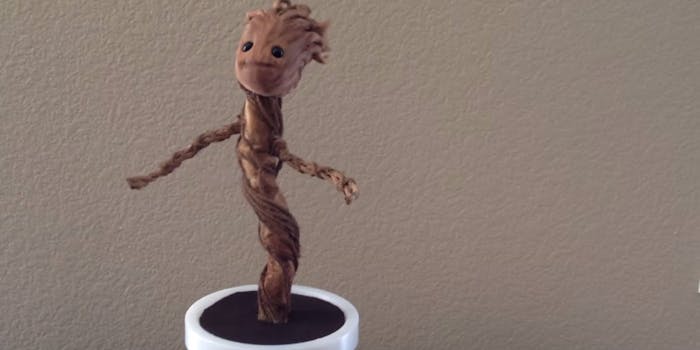 With no official version in sight, Guardians of the Galaxy fans are taking Groot toy matters into their own hands.

Warning: This article contains spoilers for Guardians of the Galaxy.

If you’ve seen Guardians of the Galaxy (and let’s face it, at this point it feels like everyone has), then you may be shocked to discover that Disney and Marvel are not selling a ton of dancing Groot toys.

The film’s mid-credits sequence seemed primed to market a cute toy to Groot’s legion of new fans, but so far Marvel has unexpectedly failed to supply that demand. Inevitably, fans have started making their own.

We’ve already seen fan-made Etsy figurines and even fanart of an imaginary Groot toy, with the only “real” examples being a bobblehead and a Hot Toys collectible that comes as part of a set costing $359.99. And neither of those can dance to the Jackson 5. So with desperation setting in, GotG fan Patrick Delahanty built his own dancing Groot.

“I made this using a ‘Movin’ & Groovin” flower I got from eBay,” he writes. “Cut off the dumb daisy, covered the stem on felt and twine, sculpted the head from Model Magic, and painted everything with brown and tan paint. He can now dance to Peter Quill’s Awesome Mix or my own.”

Marvel haven’t confirmed that they’re going to make a similar toy, although their @AgentM did mention on Twitter that they have been discussing it.

For everyone who’s asked me about a dancing [spoiler-free] #GuardiansOfTheGalaxy toy–we’ve been discussing for months. No info yet!

At this point, Marvel would be missing a trick if it failed to produce this type of dancing Groot toy. Could it possibly be holding out for the Christmas market?