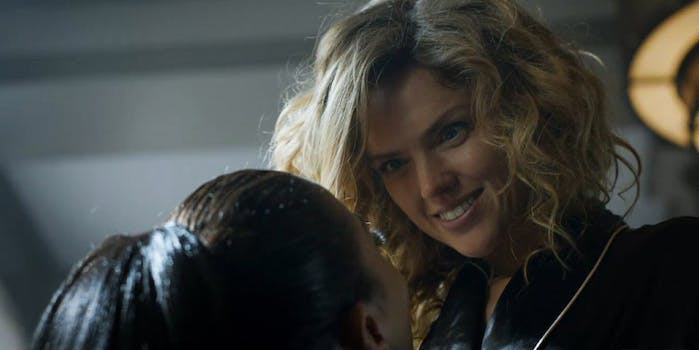 This ‘Gotham’ fan theory guesses at who could become the Joker

The Joker may get 'The Last Laugh' after all.

Gotham‘s Joker may have had the last laugh in this week’s episode after all—just not in the way you think. A new fan theory argues that the show may have an entirely new trick up its sleeve—and last season’s most maligned character could be the key to everything.

If you’ve been following Season 2 of Gotham, you may have noticed that it’s turned a few critical heads during its first three episodes. Instead of the plodding, unfocused plot that frustrated viewers endlessly last season, this season’s storyline has honed in on Jim Gordon’s ex-girlfriend (and canonical first wife) Barbara Kean and the band of motley villains she meets in her brief time in Arkham Asylum, before they’re broken out of prison by — er, Theo Galavan. These include Cameron Monaghan’s character Jerome, who we met briefly last fall as a troubled teenager.

In this week’s episode, “The Last Laugh,” fans got a huge and game-changing shock: After months of buildup around Jerome as the narrative’s presumed Joker, he was abruptly killed on Gotham city’s live television, and his schtick of the maniacal sociopath instantly caught on among the next generation of those watching. Instead of Jerome becoming the Joker, he left a city of red-headed truants mythologizing him in classic copycat style, turning the Joker into an instant part of the mythos of Gotham even before he materializes in the flesh.

This has baffled fans who had readily embraced Jerome’s character and his origin story as a suitable fit for the most enigmatic archvillain of all time. Now not only are we left wondering who the “real” Joker will be, we don’t know how that person will build on Jerome’s particular personality tics—the rigid grin, the giddy laughter, the flair for drama—without going totally over the top.

Luckily for fans who enjoy embracing the most left-field theories, there’s a good one waiting in the wings—or perhaps a good woman.

Could Barbara Kean be the real Joker?

Before you start to scoff, there’s plenty of evidence to support this theory. Most fans already thought the storyline was pointing in the direction of having her become the show’s Harley Quinn to Monaghan’s Joker. Even though her backstory differs considerably from Harley’s, the end of last season saw Babs go full-on psychopath after her run-in with a serial killer and a mental break that led to her killing her own parents, then going full-blown “crazy stalker ex” on Jim’s new girlfriend and Jim himself.

This season has been more of the same for Barbara: Despite being held captive, sexually assaulted, Stockholm Syndromed, and forced be complicit in the murder of her family, she’s shown no traces of residual trauma or remorse, and in fact seems to have gleefully given herself over to her new psychotic personality. Sadly, this isn’t an improvement on season 1, when her entire character mostly consisted of either staying at home battling a drug habit and being neurotic, or else getting kidnapped, assaulted, and having to be rescued. But well not better, it is drastically different. And Harley Quinn is a hugely popular character whose complicated moral compass has helped make her an enduring favorite.

Barbara could definitely make for an interesting Harley, though this development wouldn’t explain her bizarrely abrupt personality shift last spring. But there’s another theory on the rise. What if Babs was one of the people who picked up Jerome’s Joker mantle? Could Gotham be due for a female archvillain?

Numerous clues point to this theory. There’s Barbara’s tendency to smile oddly when she’s delivering particularly brutal or psychotic news to someone, as well as her newly revealed talent for skillfully manipulating the people around her. She clearly has a playful side and an affection for theatrics, like the obvious fun she had as the magician’s assistant in the latest episode. Last season we saw her teach Selina Kyle—future Catwoman—the importance of using fashion to disguise your true nature. And significantly, after Jerome’s death, in an exchange with Theo about Jerome’s style, she remarked that she thought “the kid had a way about him.”

Speaking to ComicBook.com, Gotham showrunner Bruno Heller endorsed the thought process behind the theory, without outright confirming it, calling it “100 percent possible”:

100 percent possible. One of the central themes of the DC world is transformation and revelation. Absolutely, those kinds of–I wouldn’t want to call it playing with people’s expectations or gender expectations—but we’ve absolutely considered the possibility of a female Joker, and we haven’t… well I’ll stop myself from saying more because I won’t be able to stop revealing things. (laughs)

If it’s true, this could be one of the most interesting directions for the character of the Joker we’ve yet seen. Unlike the roles of Batman and Robin, which have pretty thoroughly been shown to be larger than the men who inhabit them, the Joker himself is a singular figure. Even though, as we learn in The Killing Joke, he famously has no clear origin story, the Joker has always—as far as we know—been one man.

But the death of Jerome and the subsequent idolization of him by would-be criminals is a major hint that the Joker is an amalgam of different characters who lend their traits to the final package. If that’s the case, then having Barbara be the Joker would at least provide a logical narrative reason for her role as a perpetual victim in the first season—it served to put her into contact with an extraordinarily high number of evil and sociopathic characters, all whom could serve as teachers for the Barbara who ultimately puts on the face paint.

So what do you think? Is Barbara Kean our best candidate for the role of Clown Prince—or is Gotham just leading us on a path full of red herrings?