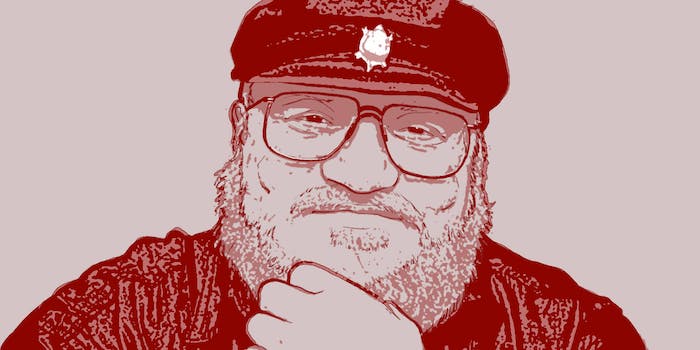 George R.R. Martin explains why he’ll keep killing all the characters you love

George R.R. Martin has never shied away from killing fan-favorite characters in A Song of Ice and Fire, and in a new interview, he promised to continue doing so.

Speaking with Joy Ward in the May 2016 issue of Galaxy’s Edge, Martin described his love of science fiction since his childhood in Bayonne, New Jersey; discussed getting started as a writer in the 1970s; and offered plenty of advice for people looking to become professional writers. But of course, he also addressed his epic fantasy series, and, more specifically, how he handles death in it.

You can probably guess that Martin isn’t particularly concerned with saving the hero of the story or the characters you love if it doesn’t serve a bigger purpose. He’s used real historical events as the basis for some of the biggest events of his fantasy series series and has spoken about the importance of writing realistically—even when it comes to sexual violence against women in the books, something he’s been criticized for on a regular basis.

Martin says he wants to write a realistic story, because not doing so is “such a cheat.” And that often includes killing off important or major figures before they’re able to fulfill their ultimate purpose or quest.

Essentially, he says, if you’re writing a story about conflict, you need to be honest about it—and that includes sometimes killing the hero.

I don’t think of it in those terms, that I’m using death for any purpose. I think a writer, even a fantasy writer, has an obligation to tell the truth and the truth is, as we say in Game of Thrones, all men must die. Particularly if you’re writing about war, which is certainly a central subject in Game of Thrones. It has been in a lot of my fiction, not all of it by any means but certainly a lot of it, going all the way back to “The Hero,” which was a story about a warrior. You can’t write about war and violence without having death. If you want to be honest it should affect your main characters. We’ve all read this story a million times when a bunch of heroes set out on adventure and it’s the hero and his best friend and his girlfriend and they go through amazing hair-raising adventures and none of them die. The only ones who die are extras.

But he doesn’t beat himself up too much about it.

“I love all my characters so it’s always hard to kill them but I know it has to be done,” he added. “I tend to think I don’t kill them. The other characters kill ‘em. I shift off all blame from myself.”

This isn’t surprising, given his earlier sentiments about killing off major characters like Ned and Robb Stark. Ned was initially seen as the series’s main character before he was beheaded in A Game of Thrones, while Robb, who sought to avenge Ned’s death, failed to do so because of some human mistakes and a family that killed him for it.

“I killed Ned because everybody thinks he’s the hero and that, sure, he’s going to get into trouble, but then he’ll somehow get out of it,” Martin told Entertainment Weekly in 2013 after the Red Wedding aired. “The next predictable thing is to think his eldest son is going to rise up and avenge his father. And everybody is going to expect that. So immediately [killing Robb] became the next thing I had to do.”

Martin has also said that ASOIAF will have a “bittersweet ending,” and killing off even more major characters in the final two books of the series is certainly one way to do it. (Yes, maybe even his own personal favorite character one day.) So those happier moments in the show lately? Don’t get used to them.