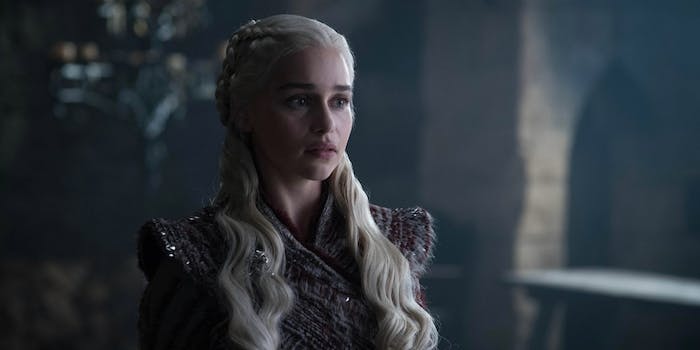 What we learned from next week’s ‘Game of Thrones’ trailer

War is coming to Winterfell's doorstep.

Game of Thrones greeted us with reunions and bombshells aplenty in the season 8 premiere, but now we’re reaching the calm of the storm.

Those stationed at Winterfell are more than aware that the Night King and his army are on his way, but before the fight of their lives arrives on their doorstep, they’ll need to clear the air.

If the season 7 finale didn’t give you the hint, the preview certainly will: there’s a lot of bad blood between the great houses of Westeros. We’ve only gotten a taste of it here, but it could lead to even more troubling implications.

The story that Viserys would tell Daenerys at night

Although they once met on the battlefield and may have stared at one another in the dragonpit of King’s Landing, the second episode of season 8 marks the first time that Jaime Lannister and Dany have actually spoken to one another.

It doesn’t matter what Jaime may have done since the dragonpit meeting or that he alone honored his pledge to fight alongside them. She clearly knows who he is and the primary role he played in murdering her father, King Aerys II Targaryen.

We know why Jaime did it; he told Brienne of Tarth about it in one of his most vulnerable moments on the series. But that is not common knowledge to the rest of Westeros, and even if Dany did know that piece of information, Jaime is still the man who killed her father. And as we saw last season with the first meeting between Dany and Jon Snow, Westerosi families can hold a murderous grudge for decades.

The trailer looks as though it’s setting us up for another bloody confrontation in the Great Hall of Winterfell, but there are a few things in Jaime’s favor. Tyrion and Brienne can both vouch for Jaime’s character unlike anyone else—and Brienne is the only one who knows about Jaime’s true motives. Bran Stark can probably vouch for Jaime’s motives because of his abilities as the Three-Eyed Raven, and given cryptic reference to Jaime in the season 8 premiere, he doesn’t seem very hellbent on getting revenge for being pushed out of a window. (At least as far as we know.) Unlike Cersei Lannister, Jaime actually showed up and can inform everyone at Winterfell what Cersei has planned. Plus the Night King is marching south, and they need everyone they can get.

Sansa gets her “I told you so” moment

In just one episode, Winterfell’s opinion of Cersei has changed dramatically. With the people’s “hindsight is 20/20” attitude, it appears as though they’re now aware of Cersei’s treachery. It’s a smaller moment for Sansa that she can hold over both Tyrion and Dany, but she’ll take it. And then it’s time to get back to work.

Will Jorah Mormont get a new sword?

Last season, Jorah Mormont relinquished the claim he had to Longclaw, the sword of House Mormont, after Jon—who received it as a gift from Jorah’s father Jeor—offered to give it back to him. But in the trailer, he takes a sword out of its casing.

Although we don’t get the world’s greatest look at the sword he wields, it’s likely Heartsbane, the Valyrian steel sword that Samwell Tarly stole from his father at Horn Hill. The pommel is obscured, but the sword’s guard appears to match up with photographs we have of Heartsbane. Sam already mentioned the sword’s existence to Dany and Jorah in the season 8 premiere, and while Sam may have already killed a White Walker, he’s not Westeros’ greatest swordsman. He might just be motivated to not only give it to someone who can wield it but also someone with whom he has a personal connection.

Fortunately for all of Winterfell, Tormund Giantsbane managed to beat the Night King to Winterfell, which will allow the castle to prepare itself. That means more weapons, leather armor for Sansa Stark, and new weapons for Arya Stark—who already put in a new request for Gendry. But time is ticking.

The fallout from R+L=J is coming

Sam’s revelation to Jon about his parents and Jon’s claim to the Iron Throne turned Jon’s life upside down. That’s a lot for any person to take in, even when there isn’t a wintry apocalypse heading to Winterfell. Although we don’t see Jon piece together the third part of that revelation—that he’s sleeping with his aunt—it’s only a matter of time.

And given that Dany visits Jon in the crypts of Winterfell, the realization that Jon had accidentally been committing incest for some time will be sure to hit him soon enough. But will Jon make a move for the throne, or continue to allow Dany to rule?