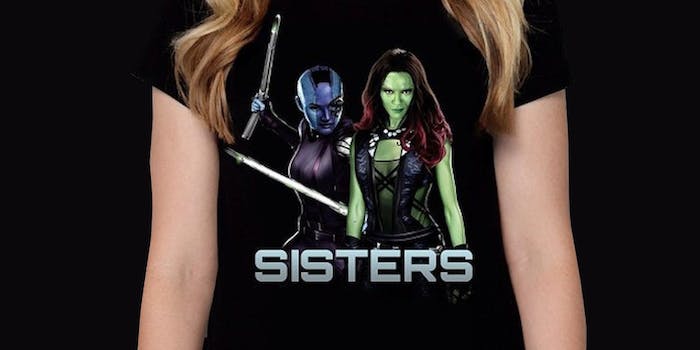 Marvel’s Guardians of the Galaxy was a huge hit this summer, and merchandise inspired by the blockbuster could be found almost anywhere. Unfortunately, fans got an unwelcome surprise when they discovered a lack of Gamora merchandise and that on some of the T-shirts featuring the quirky team, the only female member was conspicuously absent.

Outraged fans started Twitter hashtag campaigns #whereisGamora and #wheresgamora and even asked The Children’s Place why Gamora was left off one of their shirts only to receive a disappointing answer about her having been left off because it was a boys’ shirt. Luckily one retailer is stepping up to do something about this lack of Gamora merchandise.

Online geek girl fashion retailer Her Universe revealed on Instagram that it has created a shirt featuring not just Gamora but also her sister Nebula. The shirt is part of the company’s Marvel collection which was announced this summer.

“Have we been designing #GuardiansoftheGalaxy designs? YES!” Her Universe founder Ashley Eckstein wrote on Instagram. “Anna and Elsa were not the only sisters to make a splash this summer! What do you think?”

No release date for the shirt was announced, but since Her Universe will be at New York Comic-Con this weekend, it is possible customers can see this and other Guardians of the Galaxy designs—hopefully featuring more Gamora and Nebula—from the company there.