The gaming critic easily won the hearts of Colbert Nation, and boy is Gamergate pissed.

Anita Sarkeesian‘s appearance on the Colbert Report on Wednesday night was an unabashed triumph, unless you are a member of Gamergate, the two-month-long angry Internet stampede that purports to be about “ethics in journalism” but which repeated analysis has shown be a targeted campaign against women, like Sarkeesian, who ask for better treatment of women in games.

As with other major setbacks in the campaign, Gamergate supporters took this segment poorly. They were furious that Colbert gave Sarkeesian his platform to explain the movement and her role in it. In many cases, the responses were hilariously, sadly, predictably over the top. Witness the reactions on the segment’s livestream when Colbert agreed to “become a feminist” on air: 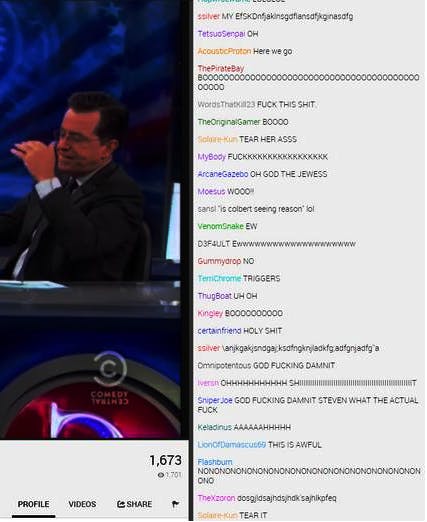 “This is their last stand,” commented one denizen of 8chan, where Gamergate has set up its home base after 4chan gave it the boot for enabling doxing and harassment campaigns aganist its perceived enemies. “They are fucking desperate for damage control, and we have them by the balls.”

It’s hard to understand who the “they” is in this equation, especially given that Gamergate’s own members are doing plenty of damage all on their own: 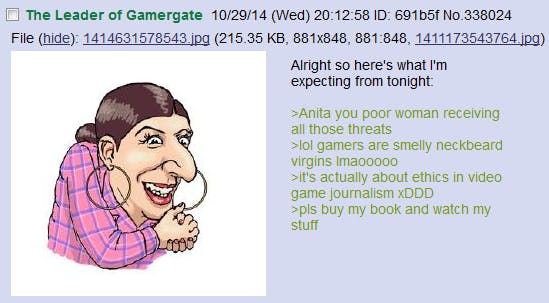 Screengrab via We Hunted the Mammoth

One 8chan poster, using the forum’s automatically assigned moniker “Leader of Gamergate,” took the segment especially hard. “MY HERO IS DEAD,” he wrote as part of an ongoing 8chan meltdown. “TIME TO LET IT ALL BURN.”

On Reddit’s r/videos page, Gamergate proponents weighed in with typical measured judgements about how hating Sarkeesian isn’t sexist because she’s just an “asshole troll.” In fact, Sarkeesian is a feminist media critic with an advanced degree who calmly points out that gaming consists of many, many, many videos where female characters are only there to serve as background sex objects, objects for protection, or fodder for manpain.

“Maybe the princess…could save herself?” – @femfreq on #colbert

On Reddit’s Gamergate home base, r/KotakuinAction, posters were livid and scrambling to take action, any action, even pointless action. One frequently heard refrain involved comparisons of Sarkeesian to Jack Thompson, a disbarred attorney who became an activist against what he views as immoral and violent video games. “You know who jack thompson is right?” wrote redditor natchil. “They dont just made a little flash game about beating him, no they made real games where you could shoot and kill him. Nobody gave a fuck. But if there is a little flash game from someone where you can beat anita, its cleary proof that gaming is sexist.”

Apparently Gamergaters find it unfair that a game where players are encouraged to beat up a real woman is considered sexist.

“When [Sarkeesian] had an opportunity to talk she had almost the exact nearly trembling voice she had in the XOXO talk,” insisted redditor koyima. Many redditors on KotakuinAction insisted on referring to her as LW2, LW meaning “literally who,” a reference to her apparent insignificance. (Her fellow harassed woman in gaming, Zoe Quinn, is LW Prime.)

The 15 million views on videos of Sarkeesian critiquing pop culture—particularly sexist gaming tropes—might argue for her being anything but an unknown. Gamergate itself has become an infamous symbol of Internet harassment in newspaper headlines and Twitter trends worldwide, but it still prides itself on getting “The Colbert Bump”:

Ladies and gentlemen, all those afraid of #GamerGate dying as a hashtag: We just got the Colbert bump. Ready that evidence for newcomers.

Thank you for the signal boost Colbert. Welcome to all of you who are new to #NotYourShield and #GamerGate pic.twitter.com/kJmpmqTE5D

Most media and bystander accounts of Gamergate reflect the fact that its ongoing harassment has overshadowed any actual criticism it had to offer about gaming journalism. When you’re backed into a corner like this, any defense helps—if only to help assuage your wounded pride. 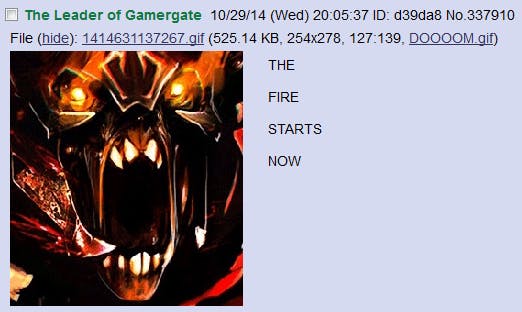 Screengrab via We Hunted the Mammoth