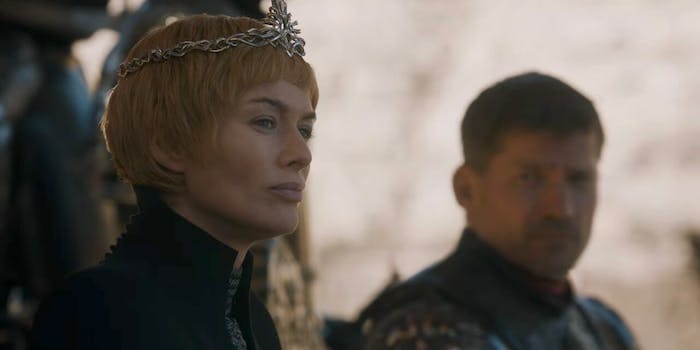 The stakes are at an all-time high.

Warning: This episode contains spoilers for the latest Game of Thrones episode, “Beyond the Wall.”

Jon Snow and Daenerys Targaryen both barely survived the latest—and fateful—encounter with the Night King at the expense of her dragon Viserion. But now they’re on their way to an arena that could prove nearly as deadly.

What else can we glimpse in those brief shots?

1. A royal showdown unlike anything we’ve ever seen

Game of Thrones costume designer Michele Clapton revealed shortly before the start of season 7 that not only would Jon meet Dany this season, but he would also find himself meeting Cersei Lannister—who he hasn’t seen since the show’s very first episode when Cersei rode up to Winterfell with Robert Baratheon.

What we didn’t expect is that all three rulers fighting for Westeros—Cersei and Dany with each other while Jon’s battle (and now Dany’s) lay far north—would be meeting together all at once. Though we don’t see Dany in the preview, there’s almost no doubt she’s there too; many of her allies have arrived to meet with Cersei including her hand Tyrion Lannister.

As agreed upon in “Eastwatch,” Cersei and Dany will meet in an attempt to call an armistice so that they can all join together to fight the Night King and the Army of the Dead. Although Jon went north to capture a wight to prove that he’s telling the truth to both queens, Dany is now fully on his side—at a great personal cost.

“There is only one war that matters,” Jon says. “And it is here.”

If everyone can come to an agreement and win that war, then they can fight amongst themselves. But chances are, it won’t be that easy.

2. The decaying, new locale of this fateful meeting

In previous seasons, if someone wanted to meet with the ruler of the Seven Kingdoms, it took place in the throne room. Or, with Stannis and Renly Baratheon, it took place outdoors. But here, with three rulers and all of their fighters on edge, it’ll happen in a new location: the dragonpit of King’s Landing.

Although we’ve never seen it before, the dragonpit—and the ground it stood on—has a long history. The Sept of Remembrance came first before dragonfire destroyed it, but that land would later house a structure built for all of the Targaryen dragons to live. And that was eventually destroyed during the Dance of Dragons. Parts of the structure remain, but its glory days are gone and more reminiscent of ancient ruins in our world such as the Colosseum, as one Lannister soldier discovered after arriving in King’s Landing.

At the end of “Beyond the Wall,” Jon finally did what Dany had been asking him to do for the better part of four episodes: bend the knee. (Metaphorically for now, given his latest injuries.) But when he and Dany arrive at the dragonpit, there are three covers for the rulers and their advisors to sit while they discuss terms: one for each ruler.

Only Dany witnessed Jon finally bending the knee. Is it possible that they might want to keep that under wraps as they head into the lion’s den?

4. Brienne of Tarth is a fast rider

Cersei summoned Sansa Stark to King’s Landing, but whether it’s because Sansa didn’t trust Cersei or she wanted to get Brienne of Tarth out of Winterfell—or both—Sansa sent Brienne in her stead to represent her interests.

And they arrived just in time: As Jon steps into the dragonpit, you can prominently see Podrick Payne while Brienne is more in the background.

5. The battle is set—just in case

In case anything goes wrong during that meeting, both sides are prepared to fight. The Lannister men are armed on top of the castle while the Unsullied and Dothraki surround the city. It’s unclear if Drogon and Rhaegal are in the sky, but it’s likely Dany might want them close after losing Viserion.

Luckily for Missandei—who isn’t featured in the preview—Grey Worm has survived the siege of Casterly Rock and the journey to King’s Landing.

6. Loose ends at the Red Keep, the sea, and Winterfell

Most of the preview is dedicated to King’s Landing, but we also caught the briefest of looks at Theon Greyjoy—who’s seen standing behind Jon in the dragonpit and arrives at King’s Landing with Varys and Tyrion—and Sansa up at Winterfell.

Theon appears to be collapsing on a beach, but is it at Dragonstone or King’s Landing? It does appear to share some characteristics with the shoreline we saw Davos Seaworth, Gendry, and Tyrion on a couple episodes back.

Meanwhile, Sansa is staring off into the distance on the rooftop of Winterfell. Given the growing tension between her and Arya, it’s probably not good.

And someone is seen walking into Cersei’s war room, and while it does look like Cersei from behind, that particular character is wearing more furs than we’re used to seeing Cersei wearing.

How will it end? There isn’t a White Walker in sight, but given all of the bad history between everyone, chances are not everyone will leave unscathed.