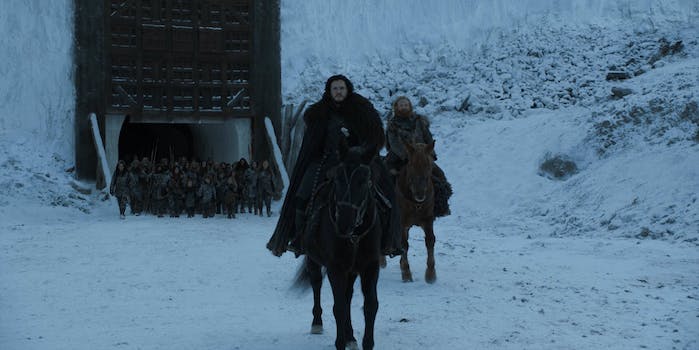 It’s been a few weeks since we’ve relitigated the end of Game of Thrones, but the show’s home release is resurfacing some very raw feelings about its final season.

Apart from congratulating series composer Ramin Djawadi, the account had been more or less dormant for nearly a month, something that’s not exactly out of the ordinary when it comes to the social media accounts for a property that’s long since aired. But that also means that the ability to meme and riff on Game of Thrones has been sparse since showrunners David Benioff and D.B. Weiss left their Star Wars series, so fans and detractors alike will take any opportunity they can get, even if it’s only the words of House Stark.

Some folks didn’t want the reminder that Game of Thrones was still a thing.

Hi… Please stop texting me. What we had was great, until you did what you did. I've moved on. I suggest you do the same. Take care… https://t.co/xvpwmvlgbb

Or, if they acknowledged it, they used the “Winter is coming” tweet as a jumping-off point to vocalize how they felt about the end of the series (both good and bad) or to call for that season 8 remake.

My most controversial opinion: I really enjoyed Season 8. https://t.co/RPHw5N55x5

If it isn't a season 8 remake, dracarys that shit https://t.co/AfwZuOK6O3

You're releasing the real season 8? https://t.co/nkF5HLQa4i

Unpopular opinion:
Season 8 was not that bad but there had been so many fan theories and it took so long to come out that a lot of hype had been created and it simply could not live upto the expectations of people https://t.co/fWSlD4n0gc

Mostly, it was just a lot of cursing.

Fuck you dawg. On mommas. https://t.co/Bv2N1KuAKu

Then you have the Weather Channel, who used the tweet to highlight two different storms hitting the U.S. in the next few days. And technically winter is coming—in about three-and-a-half weeks, that is.

It really is! And we have two snowstorms to prove it. We're covering #Dorothy and #Ezekiel during our LIVE coverage. https://t.co/xPOkGZepBq

I think they're just trolling us by being super literal. https://t.co/YjCgn0QUBL

Whether it’s sparking joy or dread, there’s a greater purpose for it: marketing. The home release of Game of Thrones season 8 and the full series is upon us, and it even has a pretty cool series-ranging trailer to accompany it, reminding us just why we fell in love with the show all over again along with everything we might have hated about it along the way. So, all in all, it’s very fitting within the realm of Game of Thrones.