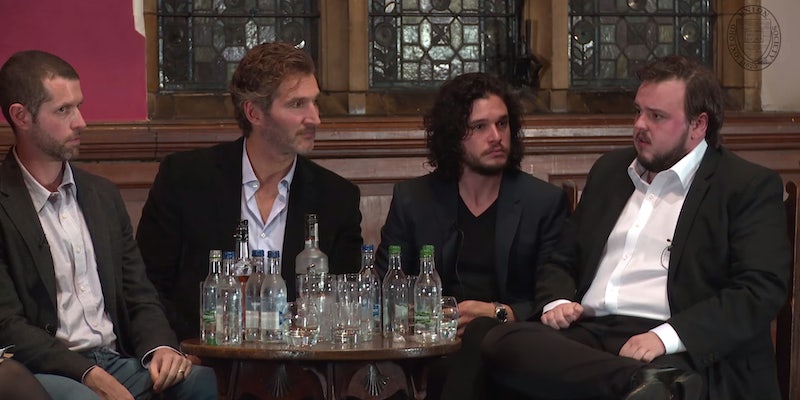 Spoilers are coming to ‘Game of Thrones’

'We’re kind of stuck between a rock and a hard place.'

The fans of A Song of Ice and Fire who avoid certain parts of the Internet out of fear of spoilers for future books may have to soon start avoiding even the TV show.

Game of Thrones show writers David Benioff and Dan Weiss spoke about the new season along with actors Kit Harington and John Bradley (who play Jon Snow and Samwell Tarly, respectively) at the Oxford Union, the same place where fellow actor Jack Gleeson struck down celebrity culture last year. Amid the many hugs and hints they confirmed some fans’ worst fears: The show will end up spoiling certain aspects of the books.

That soundbite starts around 34:36 when a student asked how the creators felt about telling author George R.R. Martin’s story before he got around to it now that some storylines were at the same place as the books.

As Benioff explained, it’s something he and Weiss have been planning with Martin for a long time. They already know how ASOIAF ends in “broad strokes” so they’re able to set things up in the show.

Luckily, we’ve been talking about this with George for a long time, ever since we saw this could happen, and we know where things are heading. And so we’ll eventually, basically, meet up at pretty much the same place where George is going; there might be a few deviations along the route, but we’re heading towards the same destination. I kind of wish that there were some things we didn’t have to spoil, but we’re kind of stuck between a rock and a hard place. The show must go on… and that’s what we’re going to do.

The idea that Benioff and Weiss will be spoiling the books for fans of the fantasy series is nothing new. They’ve been accused of airing book spoilers before, including with the possible show synopses reveal that a White Walker seen in the show’s fourth season is actually the Night’s King. HBO changed the language in the recap with no note of the change, but the tidbit didn’t escape fans. The show has also already killed Jojen Reed, who was still alive (albeit close to death) the last time we saw him in “The Children.” If a fan theory (spoiler warning!) proves true, it might give us the answer to one character’s fate before Martin does.

And from what we’ve seen and heard so far about season 5 in trailers, interviews, and reviews of the first episode so far, there’s already plenty of indications of the writers making deviations.

Instead of Riverrun, Jaime Lannister is going to Dorne. Sansa may be heading to Winterfell instead of staying at the Eyrie. A mysterious man is returning sooner than expected. And if that one character is going to make an appearance, it’s going to be a lot later than originally planned.

On the other hand, the writers are choosing to pause Bran and Hodor’s story instead of advancing it past where it stands in the show and the books: with the Three-Eyed Raven.

Ultimately, Benioff feels that even if book fans end up seeing new developments in the show first, they’ll still want to read the books anyway, and it won’t hurt book sales at all.

I think the thing that’s kind of fun for George is the idea that he can still have surprises for people even once they’ve watched the show through to the conclusion. There are certain things that are going to happen in the books that are different in the show, and I think people who love the show and want more—want to know more about the characters, want to know more about the different characters who might not have made the cut for the show—will be able to turn to the books.

Some hardcore book fans may stop watching the show because of those spoilers. They’re the ones who only want the story to advance the way Martin had intended it: on the pages of The Winds of Winter and A Dream of Spring. But for Benioff and Weiss (and Martin) to tell the story they want to tell on the screen, that’s a risk they’re willing to take.