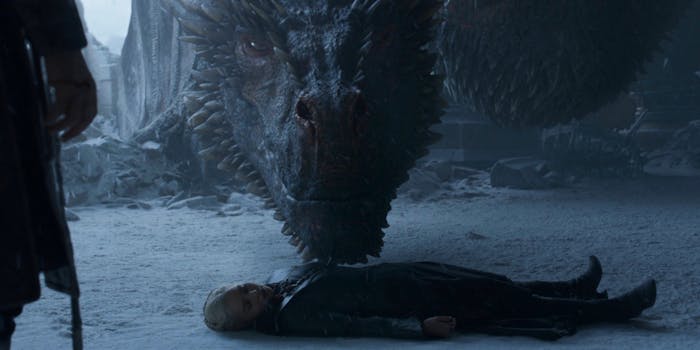 What happened to Daenerys Targaryen at the very end of Game of Thrones? We saw her fall within sight of the Iron Throne, stabbed with a dagger by her nephew and one-time lover Jon Snow to stop her from burning all of Westeros to the ground. The last time we see her body, Drogon just melted the Iron Throne, picked her up, and flew away.

But if one scenario played out off-screen, things might’ve gotten pretty grim.

We don’t know what happened to Dany’s body after Drogon took her, leaving a series of unexplored possibilities. With the question still on his mind, HuffPost’s Bill Bradley asked a forensic anthropologist about the possibility that Drogon ate his dead mother (in a manner of speaking).

“Might he eat her? Possibly, yes,” Dr. Carolyn Rando, who’s with the UCL Institute of Archaeology, told HuffPost. “I don’t think we can discount that he was going off to eat her.”

Rando points to case studies where pets have started to eat their dead owners, no matter the amount of love between them, several days after the owner died, leaving them with no food of their own to consume. It’s possible in the sense that Drogon is an animal, carrying a human body across the Narrow Sea that he could hypothetically cook and eat. (According to A Clash of Kings, dragons consume cooked meat after heating it with their flames.)

But we’re also talking about a mythical beast (and not a cat or dog) with a rather unique connection to Dany in a couple of regards: Dany and Drogon’s relationship was akin to that of a mother and child, and even deeper than one between a pet and their owner, and the two were bonded as a dragon and dragonrider.

We also don’t know if dragons would eat humans. They have no problems with burning them to a crisp, whether it’s the countless soldiers and civilians that Dany orders Drogon to burn from season 3’s “And Now His Watch Is Ended” all the way to the end of the series. But we have never seen Drogon consume human flesh, even after torching humans.

What we do see, amid the piles of charred bones that the dragons form at various points throughout the series, are the remains of animals such as sheep. And no matter where Drogon is taking Dany, whether it’s to drop her into the sea, to a red priestess in Volantis for an attempted resurrection, or to give her a pyre, Drogon will likely be able to find something to eat so that he doesn’t have to resort to eating his mother. After all, George R.R. Martin has said that dragons in his world are intelligent.

Dany may say that dragons eat “whatever they want” in response to a question asked by Sansa Stark early in season 8, but as far as we know, there’s at least one thing that Drogon won’t touch. As for the reality, as much as reality exists within Game of Thrones, Rando is hopeful that Drogon wasn’t taking Dany away to feast on her flesh.

“It seems like the dragons in the show have some sort of semblance of understanding of human behavior a little bit,” Rando said. “And so they see her as a parent. So it was a grief type of thing.”