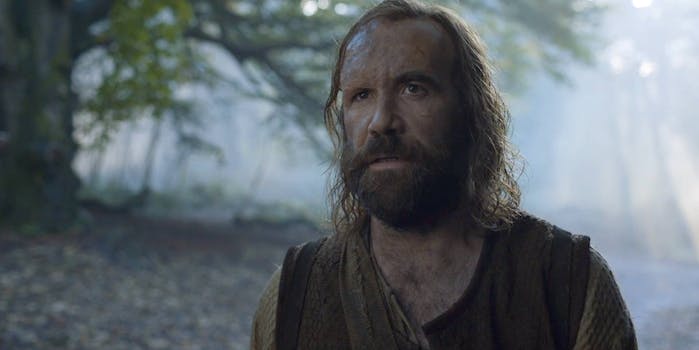 Did ‘Game of Thrones’ just axe the Cleganebowl fan theory?

The Hypeslayer has struck again.

Warning: This article contains spoilers from the latest Game of Thrones episode, “No One.”

Game of Thrones has confirmed more than its fair share of long and detailed fan theories this season, but did it just crush our hype and dreams?

On the surface, it appears as though it has. In the episode “No One,” King Tommen Baratheon—under the influence of the High Sparrow and the Faith of the Seven—made some announcements to the Court. He revealed the starting dates of the trials of Cersei Lannister and Loras Tyrell, and after prayer and reflection, the Crown has banned the practice of trial by combat.

“The tradition is a brutish one, a scheme devised by corrupt rulers in order to avoid true judgment from the gods,” Tommen said. “Cersei Lannister and Loras Tyrell will stand trial before seven septons as it was in the earliest days of the Faith.”

Trials by combat, which have long been a right of the accused when put on trial, essentially puts justice in the gods’ hands. Two men fight one another in single combat (it can either be the accused or someone appointed to fight) and it only ends when someone yields or is killed. We’ve already seen three of them play out in Game of Thrones: the sellsword Bronn went up against a knight of the Vale after Tyrion Lannister was accused of murdering Jon Arryn and attempting to murder Bran Stark; Sandor Clegane’s duel against a flame-sword-wielding Beric Dondarrion in season 3; and Oberyn Martell’s fatal matchup against the Mountain to determine Tyrion’s fate. According to the laws of Westeros, the outcome directly determines someone’s guilt or innocence.

Cersei has been counting on a trial by combat pretty much since she did the walk of atonement last season, and with a silent, zombified Mountain by her side, she couldn’t lose. The Faith Militant has already seen what the Mountain can do, and perhaps because they know they can’t win, they took away Cersei’s one trump card. It’s a devastating blow, for sure.

But the only blow that’s even bigger? Those who were theorizing that Cleganebowl would happen.

The theory of Cleganebowl, which was tinfoil at best, rested on Cersei’s trial by combat. Ser Gregor Clegane (the Mountain), reanimated with Qyburn’s questionably ethical healing skills, would face off against his younger brother Sandor (the Hound), who was brought back from death’s door by Ian McShane’s Brother Ray. They already have decades of animosity between each other, but pinning the Crown against the Faith would’ve added extra layers of depth and symbolism. However, given that Brother Ray was murdered in “The Broken Man” last week, the matchup seemed less likely.

And then Tommen went and canceled Cleganebowl.

Later in the episode, the Hound is shown chasing after the Brotherhood Without Banners members who murdered the villagers building the sept last week, and while he doesn’t kill Beric Dondarrion or Thoros of Myr, he doesn’t automatically join them when invited. Given that their affiliation is to R’hllor, the likelihood of the Hound being recruited by the Faith is even less likely than before. (It also seems to, for now, put an end to the seasons-long idea that Lady Stoneheart will emerge.)

The central subreddit for the much-hyped theory, r/cleganebowl, is handling this about as well as expected.

For now, fans are taking to r/cleganebowl to post memes and caps locked posts. The “fuck the King” sentiments, first uttered by the Hound back in season 2 about a much different king, are very prominent. Tommen is the Hypeslayer.

Cleganebowl has been around since A Feast for Crows, and for a long time there was no doubt about it among believers. But now… it probably won’t happen, at least in the show. Much of the King’s Landing plot has yet to occur in the books, so it could potentially give fans the Hype That Was Promised. Some are even still holding out hope, as messages of hope are spread among the community.

“HYPE IS ONLY DELAYED NOT CANCELLED,” one redditor wrote.

Another redditor offers a possibility of how Cleganebowl could still happen, positing that the Faith will hire the Brotherhood Without Banners (even though the BWB has killed soldiers for the Crown before) and there will be a fight between the Mountain and the Hound as King’s Landing burns to the ground, however unlikely that may be.

But there is enough reason for fans to hope for hype. After Tommen’s decree, Qyburn informs Cersei about the rumors she had him investigate. His “little birds” investigated all right, and they’ve found something.

“More,” he said when asked if it was just a rumor “Much more.”

They remain vague, but it’s implied that Qyburn’s little birds found King’s Landing’s secret stash of wildfire. And we’ve possibly already seen what she might do with it, courtesy of one of Bran’s visions. It might not be a flashback, but rather a glimpse of the future.

Don’t count a Lannister out just yet.