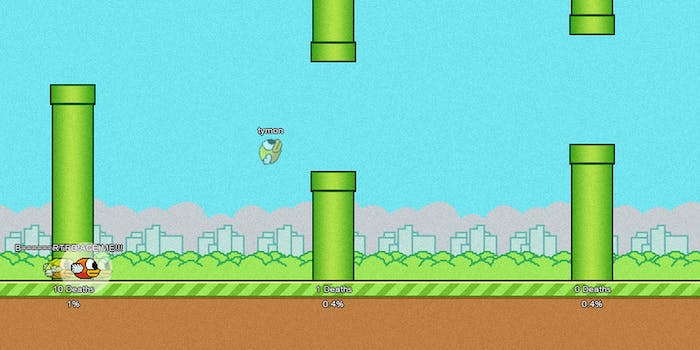 Would you play Flappy Bird for 20 minutes straight if it meant getting hired?

One Chinese gaming developer is including 20 minutes of playing Flappy Bird in its hiring process. Is this creativity or torture?

It’s hard to imagine a job requiring you to have a love of repeatedly crashing into things, but we live in a post-Flappy Bird world now, and all the rules have changed.

While many U.S. gaming industry and media critics found it difficult to take Flappy Bird seriously, at least one Chinese developer seems to have viewed the infuriating mobile app as a game-changer. After its $50,000-a-day earning spree, creator Dong Nguyen took the game offline, and the Internet saw an influx of imitations, remixes, scams, and parodies. The Internet, having discovered the wonders of flapping through the air while furiously punching your smart phone and trying not to bang into pipes, was unwilling to give up its addiction.

Now, a Chinese developer wants you to be able to play Flappy Bird for at least 20 minutes before he’ll consider you for a job. Here’s the first requirement for the listing of Android software developer, according to China News via Kotaku:

Wow. Talk about your psychological challenges. Put yourself in the position of any developer who actually responds to this ad. For starters, one of the only things that shields us from the madness of Flappy Bird is the fact that at any time we can tap out and go watch YouTube after a few minutes of bashing our avian heads against a celestial sewer pipe.

But to face the beast head-on for 20 minutes? It’s like the developer is taking team-building lessons from the Stanford Prison Experiment. What better way to roll out the welcome mat for potential employees than to subject them to torture from the outset?

We’re not sure what actual developer skills might aid someone in playing Flappy Bird—or how playing Flappy Bird might demonstrate your hitherto unknown genius for coding. Perhaps Mr. Tang, the man reportedly behind the job listing, expects his candidates to be able to deal with extreme high-stress situations.

Then again, perhaps Tang just wants to use Flappy Bird as nature intended: to filter the weak from the strong.

After all, Flappy Bird doesn’t care how many different résumé skills you can extrapolate from your summer job at Arby’s. Knowing buzz words like “seamless integration” and “scope creep prevention” won’t get you past that one short pipe that came out of nowhere. Flappy Bird doesn’t even care that you’re proficient in Excel.

No: when you sit down to play Flappy Bird, it’s an epic battle unfettered by the trappings of modern society. It’s just your brains and finger dexterity against those unforgiving Mario-green tunnels. It’s the Myth of Sisyphus all over again, only this time you’re not alone in your existential crisis. You’re struggling with everyone else who downloaded the app in a fit of madness. You’re fighting against, but also with, everyone who responded to this bizarre ad, either because they really wanted a job or because they just really wanted to play Flappy Bird.

Just as we learned from the Flappy Bird MMO, the many will quickly fall, while the few, the strong, the continually aloft, go on to wobble precariously through the air towards greatness and hopefully full-time with benefits.

Unless they hit that one spot they’ve hit the last 32 times.