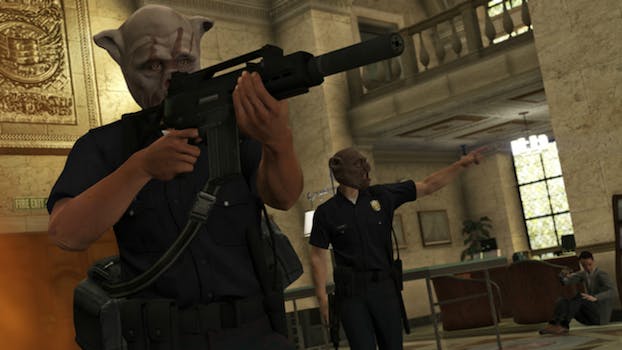 A walkthrough of the first big job added in the Heists update.

Heists are multi-stage robberies with big payouts, that require preparation and teamwork to pull off. You’ll need a high-end apartment that comes equipped with a planning room to organize a Heist, and you’ll also need enough cash to bankroll the operation. The flip side is, if you plan the Heist, you also get to decide who gets what percentage of the cut.

When we downloaded the update and checked in to the game this morning Lester’s warehouse—headquarters for the logistical mastermind behind all of Grand Theft Auto V’s biggest robberies in either story or online mode—and the first stop in the first Heist was already a complete mess of a firefight between players rushing in to try the new content.

You may want to load up into a private session just for you and your friends or Crew members, if you have enough people to run Heists without needing random players along, before you start up the new content.

Eurogamer has posted a video on YouTube that walks us through the very first Heist, a robbery of a branch of Fleeca Bank, that begins after visiting Lester at the warehouse.

Other improvements added to Grand Theft Auto Online with the Heists patch are a completely bulletproof car, daily objectives to complete, color prompts to keep your text messages organized, and the ability to duck down in your car (which will eliminate grief killings while minding your own business and driving by other players).