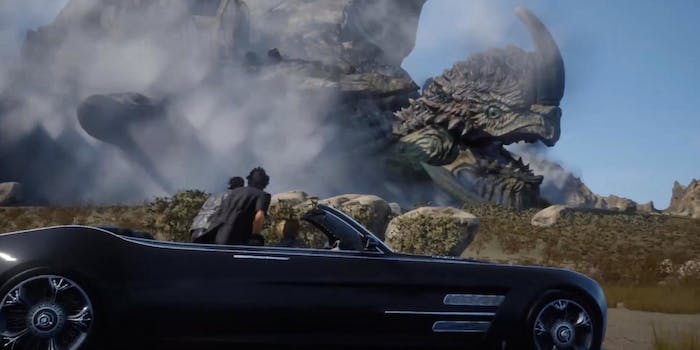 It looks worth the wait.

Do you remember the last time you saw a trailer for Square Enix’s Final Fantasy XV?

If you don’t, you can easily be forgiven—the last trailer premiered at E3 2013. Thankfully, the wait for more is finally over.

A new trailer was revealed at this year’s Tokyo Game Show, and even though it’s only two and a half minutes long, it shows us enough to pique our interest once again in this long-anticipated addition to the Final Fantasy franchise. The graphics are beautiful, giving us a setting that we’re pretty sure we can spend hours exploring. The trailer also gives us a look at what we can expect from combat in the game.

Square Enix said that the footage featured is from its upcoming playable demo, called Episode Duscae, which will be available using a download code that comes with Final Fantasy Type-0 HD when that game is released in March 2015.

When it’s finally released, Final Fantasy XV will be available on the Playstation 4 and the Xbox One.