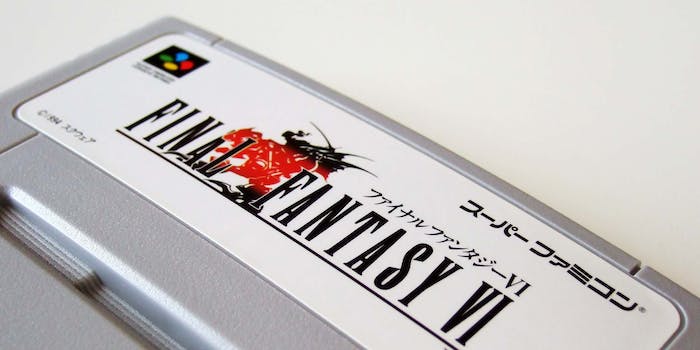 Revisiting one of the most powerful stories in gaming.

I was at a friend’s house, and his cousin was also visiting. I’d never met the cousin, but he had a Game Boy (like me), so I liked him almost instantly. But, where I was eradicating (or, more accurately, being eradicated by) the Footclan inTeenage Mutant Ninja Turtles, or dodging winged-Moai statues in Super Mario Land, he had this slow, boardgame-like game, with numbers, equipment, a map, and so many other elements that I was unfamiliar with. In particular, I remember a fight with a tiger. The one pictured here, in fact. As I think back on it, I can only assume that it’s a low level enemy, fought in one of the early game environments. At the time, however, it was something different. Something frightening.

If you do your homework, however, you’ll quickly discover that my first experience with Final Fantasy was, in fact, not with Final Fantasy at all, but with Akitoshi Kawazu’s infamous SaGa series. See, when Square the developer of the Final Fantasy series, wanted to bring over Kawazu’s zany Makai Toushi SaGa, the first in the SaGa series, to North American shores, they decided that it made more sense to release the title under a respected and successful brand, Final Fantasy, rather than attempting to sell something new. It was the right decision. Final Fantasy Legend II became Square’s first million-selling product.

At that point most of my roleplaying happened in my head, the sandpile in my backyard, or the forests surrounding my home. I didn’t have even the faintest understanding of numbers-based roleplaying—of dice hit, defense, or THAC0. Swing stick, beat bad guy—those were my rules. The rules of the fantasy worlds I played in bent to will. Final Fantasy Legend 2 wanted me to do math.

So, though my curiosity was piqued momentarily on that day at my friend’s house, I went back to playing character platformers and their instant satisfaction. I returned to adventuring through jungles, battling pirates, and exploring the cold depths of space, all in the safety of my backyard with my friends and brothers.

For a number of years after that, I forgot about Kawazu’s strange game, and the name Final Fantasy faded into a hazy memory. Until one evening.

Like any family of three young boys, my brothers and I were quite a handful. As the oldest, a ripe 11 years old, I led the charge. Vivid memories still fill my head of the time we were climbing up-and-down the ladder-like sides of a bookshelf in my living room, only to bring it crashing down to the floor, barely avoiding being crushed (and further embarrassment for my mother’s friend, who was babysitting.) After that incident, attempting to wrangle up three rambunctious boys, my parents did the only thing they could: hired a 16 year-old dude with an SNES.

One evening, he brought over a copy of Final Fantasy VI.

Keep reading at A Dribble of Ink.

Aidan Moher is the award-nominated editor of A Dribble of Ink, an online magazine about science fiction and fantasy. He grew up on a small island, and now lives in Victoria, BC.