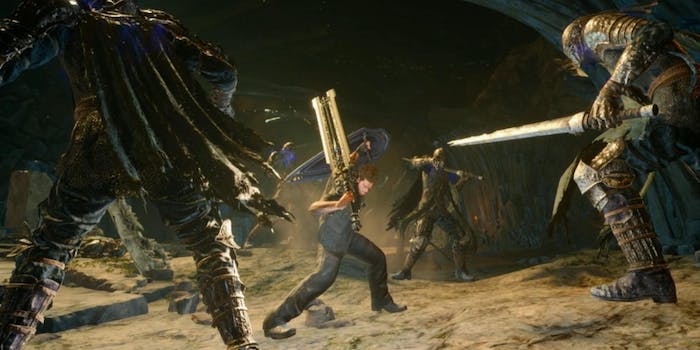 Here's what we found in our hands-on preview.

To the surprise of many, Final Fantasy XV made its way to Xbox One and PlayStation 4 at the end of last year. The game went through a painfully long decade of changes and development, but the final product turned out to be a unique and memorable entry in the JRPG series. Despite being such an expansive game at its core, there is already more content coming soon.

Episode Gladiolus launches on March 28 for both systems, at a price of $4.99, or included in the $25 Season Pass. There will be standalone episodes for the other crew members, Prompto and Ignis, later this year. We had a chance to play the first half hour of Gladio’s adventure at PAX East 2017, and came away impressed by the changes it offers.

This tale starts with a typical campfire conversation that players grew accustomed to in XV, in which Gladiolus flashes back to a pivotal moment in his story. The player then assumes control of him for the first time and is tasked with living through his memory. Gladio, the muscle of the group, plays noticeably different than main protagonist, Nocits.

As the muscle of the group, Gladio’s combat differ from the way they were in the base game. Striking foes with your weapon is immediately weightier than it was before, relying less on quick dashes and teleports and instead emphasizing blocks and chaining attacks together. His signature arts include Earth Shatter, a powerful crushing blow, as well as Tempest and Razor Edge, spinning sword moves. As he goes up against more foes, his ability to block incoming attacks increases along with his damage. Likewise, a meter will keep track of the attacks you are blocking, and grants access to the more powerful Glaive Arts.

The story follows Gladiolus undergoing The Trial of Gilgamesh to earn the approval of a legendary swordsman. To impress the Blademaster, players travel to an underground set of caves known as the tempering grounds. Both these areas and the enemies inhabiting them have a medieval, Dark Souls feeling to them.

This half-hour demonstrated the potential of distinct play styles that each separate character can afford to the player. Episode Gladiolus is expected to last between two and three hours, depending on how much you want to explore. Completing the DLC will add some new items to carry over to your save in Final Fantasy XV.