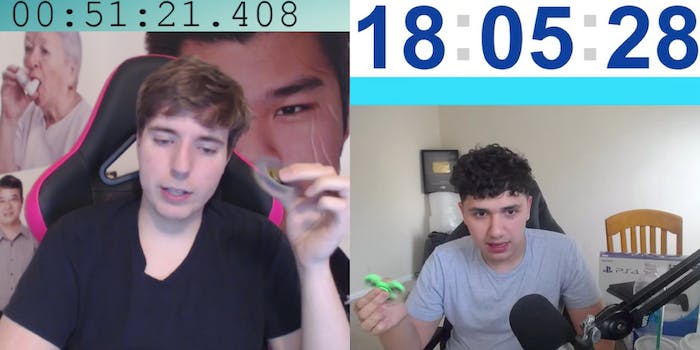 Watch these YouTubers attempt to break a fidget spinner record

Sure, fidget spinners can spin for a damn long time, but just how long can they go?

On Friday night, YouTubers MrBeast and LispyJimmy sought to find the answer by livestreaming themselves spinning fidget spinners. The bet: to beat one another at spinning a fidget spinner the longest. The goal: to spin a fidget spinner, without dropping it or stopping, for a full 24 hours.

According to a previous nearly-12-hour video uploaded by MrBeast, he had previously broken the “world record” for longest fidget spinner spun at 24 hours, but was unable to upload the footage to YouTube because it was so long. So on May 13, he attempted the world record again by livestreaming his feat on YouTube. Only, this time, he didn’t make it, falling asleep about 12 hours and 20 minute in and tucking his spinner into his arm.

Then on May 20, LispyJimmy too succumbed to the mind-numbing nature of all-day fidget spinner spinning, accidentally dropping his fidget spinner nearly 18 hours in.

Apparently MrBeast couldn’t fight off the spinner exhaustion and tapped out again, this time around the 9 hour mark.

But, his fail has left LispyJimmy to break the record himself. He’s almost 19 hours in. Watch his livestream below:

May he’ll at last fulfill his fidget spinning dreams (awake, of course).