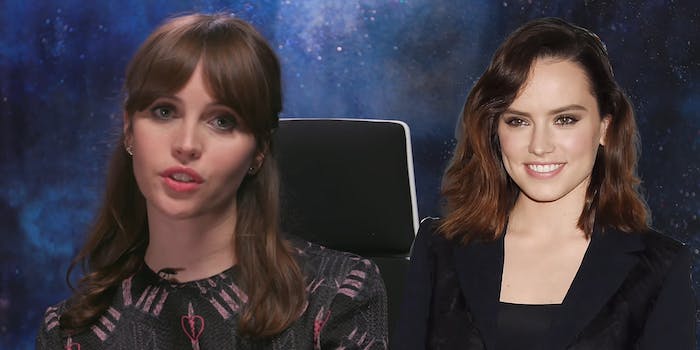 Felicity Jones has an important message for you.

The stars of Rogue One are tight-lipped about anything more than general plot details ahead of the movie’s release, but its star has one thing you should know ahead of time.

Felicity Jones, who plays Jyn Erso in the movie, made a PSA for MTV to address one big issue she’s seen play out: She’s not Daisy Ridley. For one, they both have varying tastes in Doctor Who leading men. Also, despite sexist pushback from critics, she argues that you can have two young British women in Star Wars’ vast galaxy.

And Jones totally isn’t having your “Jyn is Rey’s mom” Reddit threads. There’s bound to be other Rogue One theories to latch onto after we see the movie. So Jyn is totally Snoke, right?