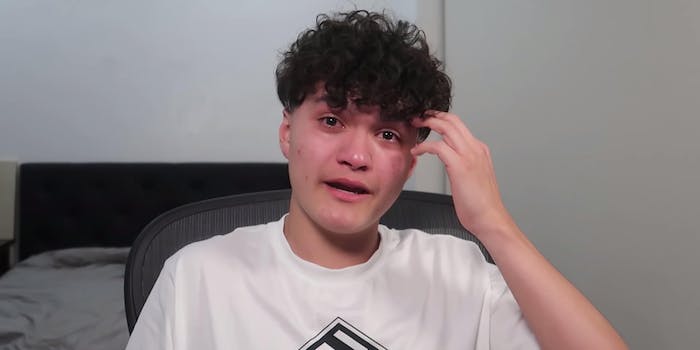 Epic Games has refused to soften the punishment.

A favorite Fortnite pro is facing harsh consequences after being caught cheating.

British player and FaZe clan member Jarvis Khattri has been banned from the popular video game for life. The company that created Fortnite, Epic Games, has clear rules when it comes to cheating, which Khattri recently violated. The young streamer made a tearful apology video after receiving news of the ban, but Epic Games has not rescinded the punishment.

The ban came in response to videos Khattri posted of himself using “aimbots” in-game. Aimbot software allows players to automatically aim at other players, which boosts accuracy immensely. Khattri, in an apology video posted Sunday, noted that he used aimbots in “solos and playground mode,” but would never “in a competitive game mode.”

The 17-year-old player vehemently apologized to his fans, other players and Epic Games itself. In the apology video, Khattri said he knew his actions were “completely wrong.”

“Genuinely, I don’t even know what I was thinking,” he said. “I mean, cheating in anything is just terrible, you should never do it. It’s not acceptable, it’s zero-tolerance. It’s just such a dumb thing to do.”

Khattri urged other players to review Epic Games’ community rules and the terms of service for Fortnite. Some fans and fellow players, like the Fortnite guy, have argued that the punishment levied against Khattri was too harsh. The Fortnite guy noted in a video that Khattri’s cheating deserved punishment, but argued a permanent ban was too harsh. “Rules are rules,” he said. “But the question at hand here is whether or not he should be permanently banned—for life.”

The Fortnite guy argued that, in particular, Khattri’s avoidance of competitive game modes while using cheats should earn him leeway. He noted that several competitive players have been caught using cheats, and the punishments they received were far less harsh than that given to Khattri. A duo that cheated during the Fortnite World Cup qualifiers was banned for only 14 days, according to the Fortnite guy’s video. Many of the commenters on Khattri’s apology video, however, seem to disagree. The majority of responses condemn the young pro’s actions. “He should be banned for life I don’t care if that’s how he made a living cheating is still cheating,” Jeremy Lister wrote.

Epic Games’ rules regarding cheating are clear. “Play fairly and within the rules of the game,” the company’s website says. “Don’t cheat, grief, team, or exploit bugs and game outcome impacting glitches.” Under “consequences,” the company outlines that punishments will vary depending on severity. “We’ll look at severity, whether you’re a repeat offender, and other factors. Action taken can be anything from a warning for less severe offenses, all the way up to a permanent account ban.”

The original video has been removed, but several YouTubers have uploaded the deleted video. While playing, Khattri noted on several occasions that he didn’t want to be banned for using cheats. At one point he informs viewers that he is on a new PC because “I don’t want to get my main PC banned,” indicating that he was well aware of the potential punishment for his actions.

Khattri noted in his apology video, however, that had he known the consequences of his actions, he never would have employed the cheats. “I’m so disappointed in myself for doing this, and not thinking about, like, the consequences that could happen.”

I’m going to take accountability for my actions and I understand completely why this has happened, I just wish I had known how severe the consequences were at the time and I would have never thought about doing it. I love all of you who still support me, this is not the end.

Epic Games confirmed Khattri’s ban to CNN on Wednesday. “We have a zero-tolerance policy for the usage of cheat software,” the company told CNN. “When people use aimbots or other cheat technologies to gain an unfair advantage, they ruin games for people who are playing fairly.”

Even if Khattri never makes it back onto Fortnite servers, the young streamer has plenty going for him. Marketing and talent agency the Fifth informed the Sun that 17-year-old Khattri made some serious money off his apology video. The apology video, which has currently been viewed nearly 8 million times, racked in a full five figures for the young YouTuber. “A safe guess is between the two figures $25,000 and $36,000,” the Fifth told the Sun. The number could be even higher, however. Even if the figures are somewhat off, Khattri has reportedly earned an estimated $2 million from gaming so far, so his future prospects are bright.