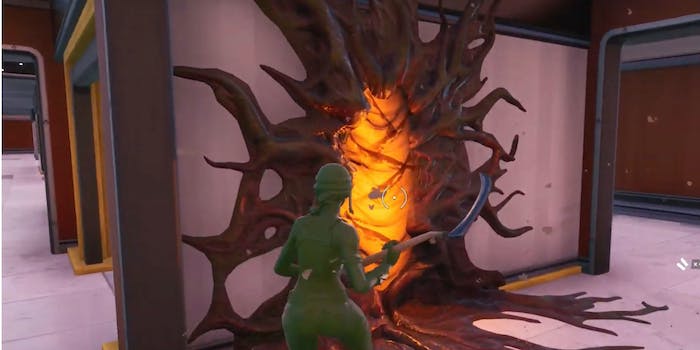 Two weeks ago, it was rumored that a Fortnite and Stranger Things crossover event would be happening. The rumor seems to be coming true as the portals seen in Netflix’s ’80s sci-fi series started popping up in certain sections of the Fortnite map.

There are multiple portals, all centered around Fortnite’s Mega Mall location. They all have the same fleshy, creepy vibe of the portals seen in Stranger Things’ Hawkins, Indiana.

In Stranger Things, the portals lead to what the kids call the “Upside Down,” an alternate dimension home to otherworldly beasts like the Demogorgon, which pursues Eleven in the first season. In Fortnite, it appears that the portals just teleport you to the mouth of another portal somewhere around the map.

An ice cream shop named “Scoops Ahoy!” showed up in Megal Mall at the start of season 9 of Fortnite, an explicit reference to an identical shop seen in Stranger Things’ trailer for season 3.

The portals have made the already popular Mega Mall a bit more hectic to navigate, considering the constantly teleporting players.

Currently, there’s still no word on if this crossover event is going to result in some unique tie-in skins for players or items. Previous crossover events with the John Wick and Avengers franchises have resulted in as much, so we’ll have to wait and see.