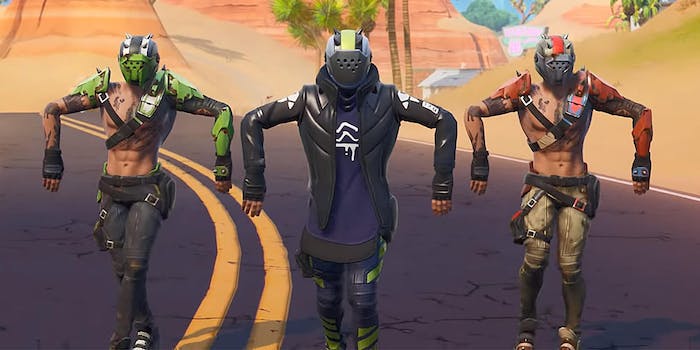 Fortnite is getting sued for being ‘as addictive as cocaine’

A Montreal-based law firm is suing Epic Games for creating Fortnite, a game they say is “as addictive, and potentially harmful, as cocaine” USA Today reports.

The law firm, Calex Légal, is suing on behalf of two parents, who USA Today identifies by the initials FN and JZ, and who’s children are players of the game.

According to the lawsuit, playing Fortnite for an extended period leads to the release of dopamine in the brain, and was developed by psychologists to be as addicting as possible, all for the sake of profit gain.

“We dug into it and we realized there was a strong case for it,” Alessandra Esposito Chartrand, an attorney with Calex Légal, told the Canadian Broadcasting Corporation.

Chartrand told CBC that her firm was contacted by the two parents looking to sue, and is now asking other parents to come forward who are “concerned about their child’s dependence on the game.” Epic Games has 30 days to respond.

Chartrand also said that a  2015 Quebec Superior Court ruling was the basis for the case. The suit, which is still ongoing according to CBC, alleged that tobacco companies failed to warn customers of the dangers associated with smoking.

“Epic Games, when they created Fortnite, for years and years, hired psychologists — they really dug into the human brain and they really made the effort to make it as addictive as possible,” Chartrand told CBC. “They knowingly put on the market a very, very addictive game which was also geared toward youth.”

Last year the World Health Organization defined addiction to online gaming as a mental disorder. Gaming disorder is “characterized by impaired control over gaming, increasing priority given to gaming over other activities to the extent that gaming takes precedence over other interests and daily activities, and continuation or escalation of gaming despite the occurrence of negative consequences.”

According to the Independent, Fortnite was previously accused of “predatory” gambling techniques, intended to make children spend money on in-app purchases.

Epic Games has not yet responded to our request for comment.