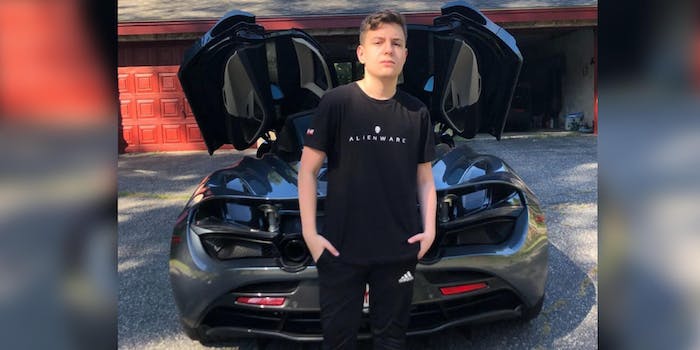 The Fortnite pro has become a target of abuse.

Cody Conrad, a 14-year-old professional Fortnite player, has become a target. In August, the streamer’s Twitch account was temporarily shut down after hackers got ahold of it and broadcast inappropriate content. Now, the young Fornite pro has joined the ranks of streamers who’ve been swatted.

Conrad was participating in a Fortnite Championship series this weekend when the prank occurred. Conrad, who goes by Clix when playing, abruptly announced that he needed a moment. “Yo, I just got swatted, one second,” Conrad said. “I gotta go.”

Thankfully, no one was injured in the incident. This is too often not the case with swatting, a dangerous prank that has seen a rise in popularity during the era of streaming. The prank involves calling the authorities to report a false crime, in hopes of summoning officers to a particular site. Often, that is a streamer’s home. Gamers have become favorite targets of swatting. The resulting police action is often caught on-stream, where thousands of viewers experience it.

The falsified reports commonly include items of particular concern, like shootings, kidnappings, and child endangerment, in hopes of encouraging a heavily armed response from police. The term “swatting” comes from the law enforcement unit SWAT, which typically responds to only the direst of situations. In 2017, a California man used swatting as a form of revenge over a Call of Duty spat. The resulting police action, in response to his false report of kidnapping, led to the death of a random Kansas man. Police fatally shot a 28-year-old man when he opened the door under the false notion that he was armed and dangerous.

No violence resulted in Conrad’s case.

His team managed to emerge victorious. The death of Conrad’s character earlier in the game meant his brief departure didn’t damage their shot at victory. The young streamer later tweeted briefly about the incident, condemning swatting while also informing his followers that everything was fine. “Swatting is so disgusting, whats the point of it,” he wrote.

Swatting is so disgusting, whats the point of it.