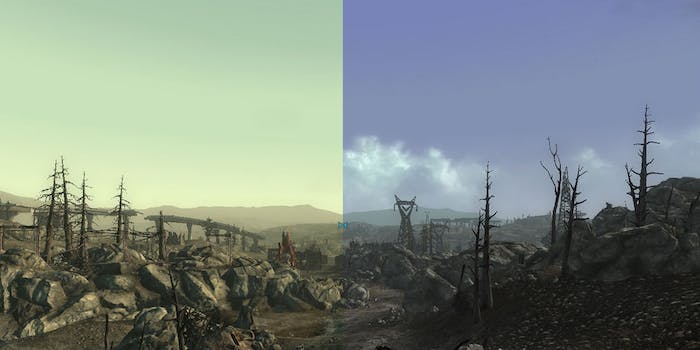 The post-apocalypse U.S. in Fallout gets beautified

Fallout mods are bringing life to the wastelands.

The two most recent Fallout games are drab, awful places filled with dirty, ugly people, at least until you apply some graphics mods that make both environments and the people in them look amazing.

A NeoGAF user has posted a handy compendium of all the best graphics mods for Fallout 3 and Fallout: New Vegas. Both games take place in an alternate future after a nuclear exchange between China and the United States, so lots of greys and browns are appropriate.

A few modders have decided to spruce up the post-apocalypse United States and its denizens. There are mods specifically for characters, flora, and the sky. Other mods focus on content rather than aesthetics, and add new interior locations and quests.

The PC versions of Fallout 3 and New Vegas are $9.99 each on Steam. The mods in the NeoGAF list are free.

Rumor and some leaked documents suggest Fallout 4 is going to be set in Boston, but developer Bethesda Software has not commented on the rumors.