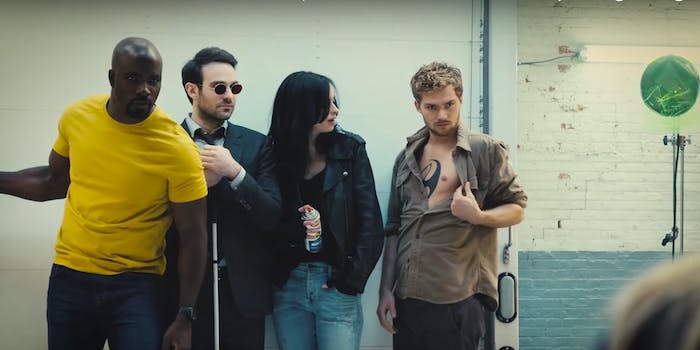 What the failure of ‘Iron Fist’ means for ‘The Defenders’

Where does Marvel go from here?

When Marvel and Netflix first announced their collaborative plans to expand the television portion of the , it quickly became evident just what an ambitious undertaking their partnership would be. Like a small-scale version of The Avengers, first they would introduce a lineup of heroes individually, giving each their own shows. Eventually, these heroes would meet in a miniseries spectacular called The Defenders.

The first Defender they introduced was Daredevil, in a show which Hitfix’s Alan Sepinwall said

“quickly moves towards the front of the overall superhero TV pack.” Netflix’s next Marvel show, Jessica Jones, was even more complex, with The Atlantic’s David Sims writing that, “You can enjoy it without knowing a thing about any other comic-book title, on the page or on the screen, and that’s just about the highest praise one can bestow on a Marvel property.” Then last year, Netflix gave us Luke Cage, and a lead character who USA Today’s Robert Bianco praised as, “the superhero that the world seems to need most right now.”

Finally, this month the fourth and final Defender arrived with Iron Fist. In one of the better reviews, Robert Yaniz Jr. at We Got This Covered called the show, “easily the least compelling Marvel Netflix series so far.” In one of the worse ones, Variety’s Maureen Ryan declared it, “the most frustrating and ferociously boring example of Netflix Drift in some time.”

So, what happened? What went wrong, and what makes Iron Fist the clear runt of all of Netflix’s current Marvel shows? There are many answers to these questions, but the more important problem for Netflix is figuring out where its corner of the MCU goes from here. Because while this may be Marvel’s first major misfire, the more troubling prospect is that Iron Fist could drag The Defenders and the rest of the Hell’s Kitchen heroes down with him.

Even before the bad reviews started pouring in, Iron Fist had a stink on it that none of Netflix’s prior Marvel shows had to contend with. While the original Iron Fist character in the comics is white, many felt that the decision to keep the martial arts-centric character that way in 2017 smacked of cultural appropriation. Calls of white savior complex also rang out, and the show had the unfortunate distinction of becoming an Internet meme leading up to its release. Combine that with what many felt were tone deaf responses to these accusations on behalf of Iron Fist’s creative team, and you’ve got a series that faced an uphill battle in winning people over no matter how good or bad it was.

Discounting cultural appropriation and complex racial dynamics entirely, Iron Fist is still a disaster. The writing is bad. Supporting characters were adapted poorly. Fight scenes that should’ve been awesome were ruined by bad editing and choreography. Those fight scenes ended up being tangential anyway in a show that turned out to be mostly a “corporate drama.”

While little is still known about The Defenders, there’s almost no way that the subpar reaction to Iron Fist won’t have some impact on the miniseries’ future reception. Imagine, if you will, that Marvel had mangled the first Iron Man, Thor, or Captain America films. It would’ve been that much tougher to make any of those characters work later as part of The Avengers. You could argue that Marvel did mishandle one of their biggest heroes with the release of The Incredible Hulk, but the problem there seemed to be fixed by recasting Ed Norton’s Bruce Banner in favor of Mark Ruffalo instead.

But while recasting does happen in the MCU (Terrence Howard, anyone?), Marvel clearly prefers to avoid it whenever possible. And if Finn Jones was the wrong choice to play Iron Fist, as some have argued, it’s too late now; The Defenders just wrapped shooting.

In Jones’ defense, he was always quite good as Loras Tyrell on Game of Thrones. But it’s hard to imagine the passionate Marvel fandom softening on him by the time The Defenders arrives later this year. Meanwhile, Jones himself has insisted that he is a “pivotal” part of The Defenders’ narrative, and while there’s a possibility that he’s just trying to put on a brave face and cover for his current show’s terrible reviews, many viewers probably can’t help but to get a little nervous.

It is possible that Iron Fist’s main job in The Defenders will be to tie the mysterious and evil organization known as The Hand into the larger story, as they’ve been shadowy figures throughout all of Marvel’s Netflix shows up till now. The character of Madame Gao, the company Midland Circle Financials, and the secret city of K’un-Lun are also potential threads which Iron Fist may help to connect.

Others have speculated that Danny Rand’s supernatural skills will play a part in the story, given that the other three Defenders’ powers are more in line with traditional superhero abilities. If this is true, it’s possible that Iron Fist may be used as a plot device more than anything in the miniseries, which, harsh as it may sound, may end up being the best case scenario. Another potential option Marvel faces is to cut Iron Fist’s role down in editing. This happens in TV and movies all the time, but it risks the story as it originally appeared on the page feeling disjointed in the final result.

As long as Iron fist isn’t The Defenders’ leader, the show is still salvageable. It’s also encouraging that The Defenders is slated to be only eight episodes, as all of Netflix’s Marvel shows, not just Iron Fist, suffer from plodding, unnecessarily long 13-episode season orders. And if nothing else, Iron Fist did set up characters like Claire Temple (Rosario Dawson) and Jeri Hogarth (Carrie-Anne Moss), who became fan favorites in past Defenders shows, to have a bigger part in the miniseries later this year.

However, it’s not a good sign that articles are being written to inform Marvel fans about what happens in Iron Fist so they don’t actually have to watch the show before The Defenders. As Netflix almost never cancels anything after just one season, it would be shocking to see Iron Fist not given a second chance, especially since it appears they’re already setting up for season two. And yet it’s strange that Netflix has yet to say anything official on the show’s future. While it notoriously don’t share numbers on how many people stream their shows, it’s a terrible sign for The Defenders and their whole stake in the MCU if Netflix decides Iron Fist is unsalvageable.

Nothing is certain though, and The Defenders remains a potentially exciting Netflix event. But if Marvel really does want The Defenders to be the TV equivalent to The Avengers, it has a long road ahead in convincing fans that Iron Fist deserves to be a part of the team.