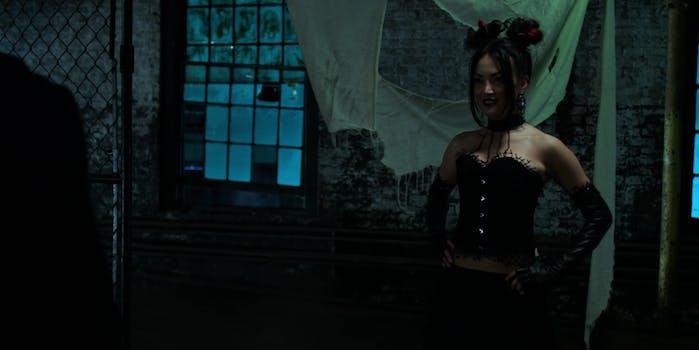 She's based on a Marvel Comics character, but her role is bizarrely sexist in the context of the show.

Warning: This article includes spoilers for episode 6 of Iron Fist.

In episode 6 of Iron Fist, there’s one character who embodies a whole raft of problems with the show. Her name is the Bride of Nine Spiders, and her entire role is a mess.

The Bride (Jane Kim) is one of four assassins Danny Rand must fight to rescue a young woman from The Hand. She’s sandwiched between two other challengers: a pair of Russian gangsters and a mercenary called Scythe.

This storyline already falls foul of the criticism aimed at Iron Fist‘s racial politics. The Hand are a mysterious Asian cult whose motives are never really explained, and Danny has to save a helpless white girl by defeating their warriors in a series of duels. However, the Bride is by far the most memorable aspect of this scenario. That’s partly because of her costume, because what the heck is this:

There are plenty of shows where this costume would go unnoticed. You can imagine seeing it in Buffy, or a cheesier superhero show like Legends of Tomorrow. But it’s distractingly incongruous in Iron Fist, which follows a subdued, realistic aesthetic with very few comic book elements. Danny doesn’t even wear the Iron Fist costume, and the show focuses more attention on corporate drama than fight scenes or superpowers.

In Iron Fist, she can best be described as a sexy assassin.

While Iron Fist’s male opponents launch straight into battle, the Bride begins by flirting with him. This scene also presents Danny as a hopelessly bad fighter, because he allows her to get close enough to kiss him and sneak into his blind spots. She then poisons him with spider venom needles—possibly as a kind of weaponized acupuncture to mess with his chi, although this isn’t explicitly stated.

For a show whose other female characters are relatively well-developed, the Bride’s role is bizarrely sexist. Unlike the “realistic” makeovers for characters like Kilgrave and Daredevil, Iron Fist decided on a direct adaptation of comic book costume: a wildly impractical corset, choker, and translucent skirt. They even dumped her supernatural powers in favor of… sexual wiles.

There’s no reason for the Bride to look or act like this, and in the end it’s detrimental to the story. The Bride of Nine Spiders as the only exception to Iron Fist‘s otherwise serious tone. And she just happens to be an evil sexy Asian lady in lingerie, defeated by the virginal and heroic Danny Rand.