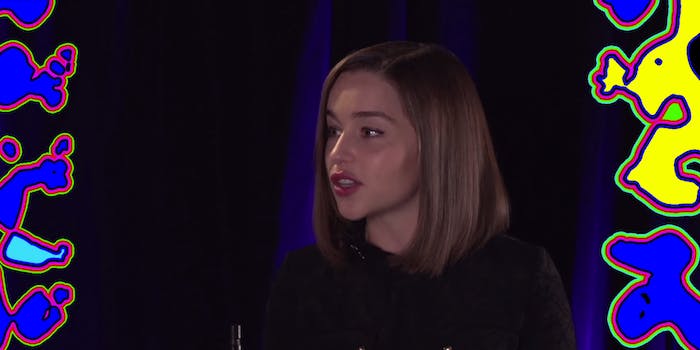 This article contains spoiler for the season 5 finale of Game of Thrones.

Despite anything the Game of Thrones showrunners have said about Jon Snow’s fate, nobody seems to believe that he’s truly dead, least of all Kit Harington’s castmates.

Emilia Clarke was just as gutted as the rest of us when she found out about the mutiny against Jon at the hands of the Night’s Watch, but she told MTV’s Josh Horowitz that she doesn’t know whether Jon will come back; since she’s a bad liar, the showrunners don’t tell her anything. But when pressed, she had this to say:

“If I had to bet, I’d say there’s like a 50/50 chance,” Clarke said. “There’s some very helpful people there who could bring him on back to life.”

Although Jon would be one less person to get in Daenerys’s way to the throne, him being alive might be more useful to her.

Curiously enough, this comes just a few days after fellow castmate Carice Van Houten, who plays the red priestess Melisandre, had some interesting thoughts on what happened to Jon at the end of the season.

“You’ve seen her clock Jon Snow, which is a great ending because you think, ‘Uh oh, what’s going to happen there?’” Van Houten told The New Daily. “You feel that she is concentrating more and more towards Jon Snow … there are slight hints that something’s going to happen.”

There’s a multitude of ways that Jon could come back, some more realistic than others. With even the cast not completely sticking to the “Jon Snow is dead” party line, the certainty of the showrunners’ final say on the matter crumbles by the day.