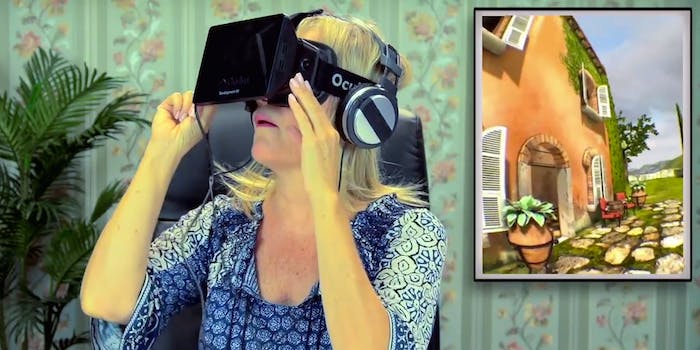 Oculus Rift might be a newer piece of gaming technology, but for some of these elders, it looks more appropriate for a “wartime situation.”

They’re introduced to Oculus Rift during the latest episode of Elders React from the Fine Brothers, and once they get past the initial confusion over what the contraption actually is, they start to appreciate the realism involved as they explore Tuscany, ride a roller coaster, and walk through a haunted house.

“Knew they were coming,” one said with a laugh. “Wondering when the full-sized naked woman was gonna jump out and hug me.”

For some, the graphics and feeling of actually being there proved to be a little too real. While they weren’t moving on that roller coaster, it was pretty difficult for them to convince their stomachs of that fact—and some of them felt sick or disgusted at what they saw.

“I’m impressed with the technology, but somebody else can buy it,” another said.