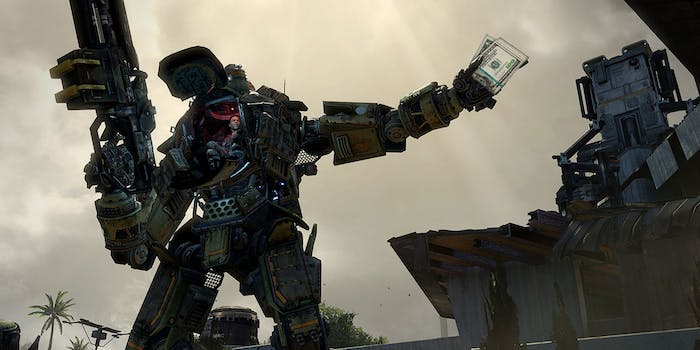 Like anything EA does—no matter how seemingly innocuous—this is already making some people angry.

For a $4.99 monthly or $29.99 annual fee, the EA Access service will offer subscribers access to The Vault, a collection of games published by Electronic Arts that subscribers may download and play for no additional cost. While the service is in beta testing, subscribers will only have access to FIFA 14, Madden NFL 25, Peggle 2, and Battlefield 4.

EA Access subscribers will also have up to five-day early access prior to the official release dates for new Electronic Arts games, according to a FAQ published on the EA website. These free demo periods will allow subscribers to try out new games. Then, if they choose to purchase the game, their save file will carry over from the demo. In other words, the time put into the trial periods won’t have been wasted.

Subscriptions will also give users 10 percent off any digital purchases of EA game content. That would include full copies of games, downloading content expansions, or membership clubs like Battlefield Premium.

Anything involving Electronic Arts, no matter how straightforward it may seem, is bound to be controversial. EA is one of the largest video game publishers in the world, so it’s never short on opportunities to make people upset.

Take the sorry launches of the Battlefield games in recent years, for instance. Or the monetization scheme for Dungeon Keeper that was so bad, EA was prohibited from advertising the game as free-to-play in the UK. Or the disaster which was the launch of SimCity in 2013.

Electronic Arts is also the progenitor of the Online Pass, which required players to either buy their EA games new, or pay a premium to unlock the online multiplayer portion for used copies of EA games. This since-discontinued initiative alone will provide fodder for anti-EA rants for years to come.

The end result of a series of debacles like this is a lack of trust. Gamers on Reddit and NeoGAF are already complaining about the EA Access program, even when some of the complaints don’t make sense. For instance, because EA Access is exclusive to the Xbox One, gamers are worrying about cronyism between Electronic Arts and Microsoft. The accusation is that Microsoft paid EA to keep the new subscription program exclusive to the Xbox One.

In a statement to Game Informer, however, a representative for Sony said the company had evaluated the EA Access program, and decided that it wasn’t a good value for PlayStation 4 users. This could be written off by the conspiracy-minded as sour grapes. Smarter money would bet on Sony making a business decision not to allow for a competing subscription service on their platform.

PS Now currently works under an a la carte rental option, with users paying varied prices for varied lengths of access to games. Sony plans to eventually offer a subscription option for PlayStation Now, hence the wisdom of declining EA Access on Sony platforms, if Sony’s goal is to eliminate the competition.

Beta invites for EA Access were sent out to some Xbox One users on Tuesday. Electronic Arts has said that general access to the subscription service will be available “soon” on the Xbox One, and released no further information.