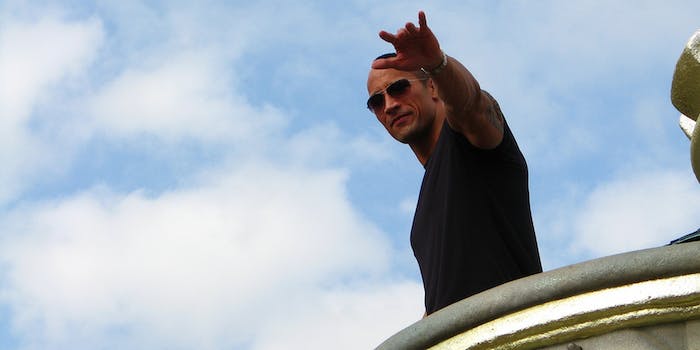 He's in the movie, but not as the hero.

After months of hints and speculation about Dwayne Johnson starring in DC Comics’ Shazam adaptation, he’s finally confirmed that he has a role in the movie. It’s not a huge surprise, since his involvement was an even more obvious open secret than Jason Momoa being cast as Aquaman.

One problem: It turns out that he isn’t actually playing Shazam.

“Kneel at his feet or get crushed by his boot.” My honor to become.. #BlackAdam #TheAntiHero #DCComics pic.twitter.com/Qk55eNf3R7

Black Adam is a supervillain (and later, an antihero) from the Shazam comics. From this tweet, it’s unclear whether he’ll get to be the main character in his own movie, or just the antagonist in a Shazam adaptation.

Intriguingly, Johnson was in talks to play Black Adam all the way back in 2007, but DC’s Shazam adaptation has been stuck in development for so long that this information was lost to the mists of time. When rumors of a Shazam movie resurfaced more recently, most fans assumed that Johnson would be playing the titular hero—particularly thanks to that one interview where he hinted he’d taken on the role.

This new revelation may come as something of a disappointment to fans who were looking forward to Dwayne Johnson in the hero’s role. Shazam (formerly Captain Marvel, until a legal dispute with Marvel Comics) has the potential to be a pretty silly character, because the basic premise is that he’s a 12-year-old boy who says the magic word “Shazam!” and then transforms into a Superman-esque hero. It’s easy to imagine The Rock playing this kind of part, because it requires a mixture of light-hearted comedy and cartoonishly huge muscles.

Still, the idea of The Rock playing a supervillain is pretty tempting, and his presence will lend a little weight to a DC character who is still relatively obscure.