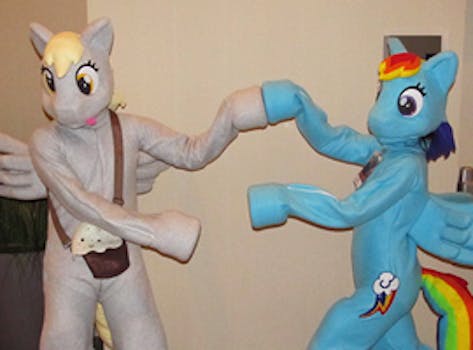 The Daily Dot visits Atlanta's DragonCon, where every stripe of Internet fandom is on display in one overwhelming real-life location.

“DragonCon is what happens when the Internet turns IRL,” says Abby, one of my roommates for Labor Day weekend. With 50,000 people all crammed into a four-block radius in the heart of downtown Atlanta, it’s easy to see how Dragon*Con, billed as the world’s largest science-fiction and fantasy convention, has come to encompass a little of everything that could remotely be considered “geeky on the Internet.”

This year’s DragonCon boasted over four thousand hours of programming spread across five hotels, a far cry from the first run in 1987, which had fewer than 1,500 attendees and took place in a single building. Though many people think the “Dragon” in DragonCon comes from its close association with fans of Anne McCaffrey, author of the bestselling Pern novels, it actually comes from the local club of sci-fi nerds and gamers that started the con.

Almost immediately, D*C began expanding from its sci-fi, fantasy, and gaming roots: In 1990, it merged with Comics Expo and chose thriller and espionage novelist Tom Clancy as guest of honor. Over the years, it added more programming tracks to encompass demand from ballooning membership. Today, sci-fi/fantasy bastions like Star Trek, Star Wars, and the Whedonverse all have their own programming tracks; but so do anime, British sci-fi, Young Adult lit, and gaming. The Armory track shows hardcore RPG enthusiasts how to build, train with, and use weapons of all sorts. In the Science track, panels devoted to building robots and discussing the state of NASA, while over at the Electronic Frontiers track, netizens explore everything from SOPA to Reddit to how to be a better hacker.

The result is a dizzying hodgepodge of nerdiness. D*C is literally the only place in the world where I can cross the hall from a panel on actual cannibalism to attend a podcast of Celtic drinking songs for Trekkies.

There are even tracks that conflict with each other: In the Hyatt, the Paranormal track teaches you to build your own EMF meters and white noise detectors for maximum ghost-hunting efficiency, while in the Hilton, the Skeptic track urges you to question everything from homeopathy to paranormal investigators. I asked presenter Tim Farley if the skeptics and paranormal fans had ever came to blows. He said no, but that one year’s presentation by a self-professed ghost hunter who was also a skeptic had proven … interesting.

Above all, there’s cosplay.

“Cosplay is the best part of DragonCon,” says a man dressed as the Riddler to me on Friday. Many people I speak to came to D*C primarily to show off their own elaborate costumes, do photoshoots on the con floor, and enjoy everyone else’s contributions. This year’s Steampunk track, just added in 2009, is by far the track with the largest amount of programming, and Victorian bustles, brass goggles, and even full-on motorized contraptions abound.

Every square inch of the con is full of cosplay of all kinds. Darkwing Duck gets called to participate in a game of Jeopardy. A blood-spattered Benedict Cumberbatch spontaneously gets invited to be on the Sherlock panel, harpoon and all. At the Peachtree Center between the three main host hotels, a dead ringer for Samuel L. Jackson in Pulp Fiction gets a round of applause when he quotes all of the film’s famous fictional Bible passage. Then there is the zombie parade, where hordes of the undead promote their political agenda: brains for the people.

In the Marriott, a man walks by a rather nondescript Aquaman and tells him, “You’re the best superhero. Never let anyone tell you any different.” Aquaman walks away with a private smile, as if he’s taking these words to heart.

Monty Python’s knights have lost the crusades and settled for drinking in the crowded hotel bar instead. “I used to work at the Sun-Trust behind the Hilton in 1989,” Lancelot tells me, lifting his helmet for better beer chugging. “And this thing just showed up.” He’s referring to the year the con outgrew its earlier venues and moved downtown. He and his friends, not exactly part of the sci-fi crowd, have been cosplaying in full regalia and coming to the con ever since.

“There are tracks and panels about literally everything,” says Abby, who’s in her third year of attendance. “I could take my parents and they’d find something they would like.” One thing that strikes me is the diversity of the crowd—it’s not nearly as ethnocentric as other conventions or festivals of comparable size. “It makes me want to laugh when dudebros talk about ‘geek culture,’” says Abby, “and how it is always a white male culture when they can’t even see it growing like it is.”

Diversity on panels was an issue. At the otherwise excellent “state of women in comics,” the male moderator had to apologize for only having one woman, a last-minute addition, on the panel. A group of women walked out of one panel because what was billed as a discussion on gender turned out to be a discussion solely of masculinity. And shortly before this year’s con, staff caused a controversy by refusing to sanction ribbons for con-goers potentially able to help in a dangerous situation.

Most damning of all, Ed Kramer, one of the con’s founders, has allegedly used profits from the convention to evade trial on multiple charges of child molestation for over a decade.

Despite the con’s structural problems with harassment, the feeling on the con floor seemed to be supportive of diversity and safe spaces. At Hacker 301, a discussion about recent issues of harassment in Brony fandom led into a talk among the majority male audience about what they could do to make their communities safer for all. Given the obvious attempts to make the con itself as welcoming to as many facets of geek culture as possible, it’s easy to hope that one trend can lead into the other.

It can also lead to changed lives. In the introduction to her 2011 anthology celebrating the con’s 25th anniversary, blogger Clare McBride writes:

These people are all passionate and respectful about what they do, be it costuming, writing, or anything else, and what they love, be it a book, a film series, or a video game. Dragon*Con and my fellow congoers taught me that if you can’t do something with passion, it’s downright disrespectful just to go through the motions. Accordingly, I gathered up the courage to abandon my vague abstractions of a career in law and tackle my one true love—editing.

It’s easy to write off a convention as large as DragonCon as too big to be really impactful on a personal level, but everywhere I went, I ran into people who knew me. It felt more like the small cons I was used to, and less like the Comic Con-like colossus I was expecting. Granted, Comic Con has three times as many attendees as DragonCon, but it was easy to forget that when trying to navigate crowds and move between hotels. I heard numerous complaints about the growing size of the con, the difficulty of moving between con locations, the huge lines for celebrity guests like Stan Lee, and the difficulty of communicating in a con spread out across five different locations, each with spotty wireless connections. One weary mom resignedly told me that she’d been looking for her son in the massive crowds for the last seven hours.

Still, every person I talked to told me they’d be back next year. The academics are trying to organize support for adding an academic track to future programming, and several fans spoke of wanting to increase programming for Supernatural and other paranormal media. I went to Dragon*Con expecting to feel a bit out of place as someone who, personally, is fond of less dragons and more Darcy, less Whedon, more Wodehouse. But I came away feeling oddly included, as if geek culture were expanding, just as Dragon*Con itself, to encompass even those of us on the fringes.

Just like the Internet, pan-fandom cons like Dragon*Con are redefining who can call themselves geeks. Lancelot may not have found the Holy Land when Dragon*Con showed up at his door, but he arguably found something even better: a mecca for anyone who’s ever been a fan, in an era where fandom itself is constantly expanding its borders.

All images by Aja Romano