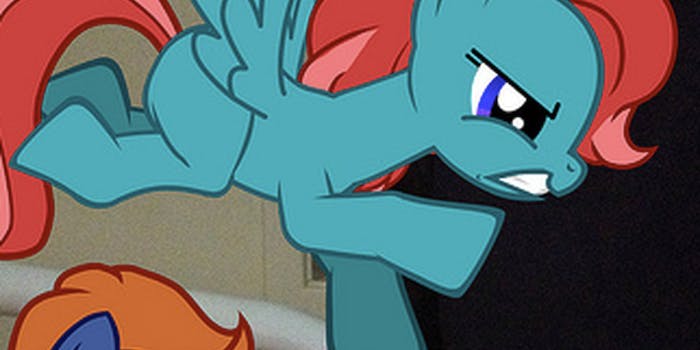 What really happened at Everfree Northwest?

Reports of harassment at a Seattle brony convention appeared on Tumblr this week, but the situation has grown more complicated as.convention staff and some members of the brony community dispute the accounts.

According to Austin “Bejoty” Hedeen, the Everfree convention head, the staff is taking the investigation seriously.

“As far as our response, we’ve been looking into as much concrete evidence as we can,” he told the Daily Dot. “All of the rumors so far have shown to be highly exaggerated, resolved, or disproven.”

Hedeen also let the Daily Dot know that at least one Everfree guest, voice actress Michelle Creber, stated on her Twitter that she experienced nothing but positive comments from bronies.

Could the people indicating they’d been choked, made to feel marginalized, or otherwise made uncomfortable be lying about it? Hounded with hate mail and demands for proof, Mjolkk is regretting she shared her Everfree experience at all:

“I’ve said it already but I’ll say it again: I would love to give you proof, but my face is not a camera. I have been hoping that more people would come forward with their own stories, and they have been. I was not the only one who saw the kind of behavior that had been going on and more accounts of it are starting to come out. I can’t give you more than that.”

As more bronies come forward with stories of harassment, their testimonies are being discredited as quickly as they can share them. After a female brony said she was tackled at Everfree over a disagreement about which pony is best, she was immediately called a liar:

“I… honestly have to call bullshit on this story. The others i can believe, but this one just doesn’t add up at all,” TwoTone wrote.

There’s no way to tell whether or not Tumblr users are telling the truth. But there are many sites dedicated to nothing more than exposing bad brony behavior—Prejudice is Magic, Brony Say, Brony Horror Stories, Sane MLP Fans, and Rabid Idiot Brony, just to name a few. No matter how many times it has happened before, bronies were quick to deny any wrongdoing at Everfree.

“I have done my research. I’ve read the original posts, the follow ups by the OP, all the posts dispelling the most popular rumors, and the majority of reactions … Now, while I agree with the whole ‘few bad apples in the bunch’ thing, I’m actually kind of disgusted by how many bronies are hiding behind it. This is someone who saw people being blatantly homophobic, transphobic, racist, and generally disrespectful. It doesn’t matter what the fandom is, that is a problem. If you are that uncomfortable at a convention, that’s a very bad sign.”

Other bronies argued that My Little Pony: Friendship is Magic is not actually about love or tolerance, and so attendees should not expect tolerance at a brony convention or within the brony fandom. A blog post titled Love, Tolerance, and Other Myths suggests that the show is more intolerant than fans give it credit for.

According to Pinky Pie Swear:

“The first sentence of the [Daily Dot] article is pretty much the whole problem with people complaining about the con. ‘My Little Pony: Friendship is Magic stresses the importance of treating everyone with love and tolerance.’ Nope, sorry. It does not. So then you get these people who expect all bronies to just love the hell out of each other at a convention filled with a butt load of people with different likes, tastes, opinions and humor? PLEASE.”

However, the convention’s Code of Conduct is—literally—to “love and tolerate.” Whatever bronies believe, tolerance was expected here.

Now it’s up to the community, not the convention, to face these issues of harassment.

The Daily Dot spoke with Tim Garman, a fandom convention volunteer with 20 years of experience, including nearly a decade running convention security. He told us that any fandom convention, it’s best to report bad behavior when it happens, not after the fact.

“When you’ve got a thousand people in a space, there’s going to be potential threats happening,” he said. “A convention is a microcosm of society, and both good and bad stuff happens. But conventions can’t do anything unless you tell somebody about it. You should go to the security or public safety office of the con as soon as you see something.”