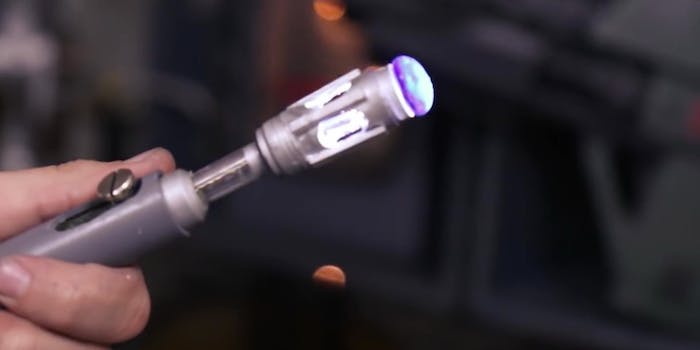 It costs less than some online offerings, and it'll give you a story to tell fellow fans.

Why take the easy route and buy a Doctor Who sonic screwdriver when you can make your own?

If you’re up for the challenge, the latest episode of the YouTube DIY show Prop Shop shows you how to do it. In the video, released on Monday, host Dustin McLean creates the Tenth Doctor’s iconic sonic screwdriver.

He uses an array of tools for the project, plus materials like pens, popsicle sticks, metallic paint, and superglue. There are a lot of random items, and it’s interesting to see how they all fit together as McLean goes through the process.

Even if you don’t own a majority of these items already, McLean estimates that the project only costs about $25, which isn’t bad, considering the varying online prices of a Tenth Doctor sonic screwdriver. For example, Amazon sells one for $15.35, but ThinkGeek sells one for $29.99.

Although the prop might take a bit of work and seems like it could be difficult for DIY newbies, the challenge of making one would certainly give you more stories to tell your fellow Whovians than if you just bought one!