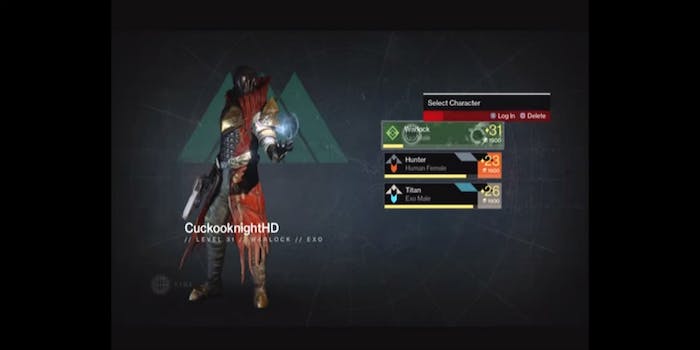 If there were any doubt that the abuse in online video game culture is completely out of control, it ought to be put to bed by a recent display of preposterously casual malice.

On February 13, a Destiny video was posted on YouTube showing a fifth grader named Henry losing, in just a few seconds, what must have been hundreds of hours’ worth of hard work. Henry had passed control of his Destiny account to another player online, using the PlayStation 4‘s Share Play functionality, in order to have this player run one of his characters through a glitch that would rapidly advance the character’s level.

Leveling up a character in Destiny is a grind. The temptation was understandable. Henry will think twice about future lazy workarounds, however, after the depressing end result of this Share Play session.

In the video (which cannot be embedded on other sites), we see Henry, a.k.a. CuckooknightHD, handing control of his Destiny account over to another account, KirmitTHEfrog, at the 11:46 mark.

Then, at 13:48, Kirmit deletes Henry’s level 31 character. For some perspective, it can literally take months of daily play to get a Destiny character to level 31.

Henry must not have been paying attention, because he also loses a level 26 character and a very rare weapon on his third character before realizing what was going on and turning off his PS4. The most depressing part of the video is when Henry jumps back into a party with KirmitTHEfrog and tries to casually play off what happened. This is followed by Henry’s sobs. 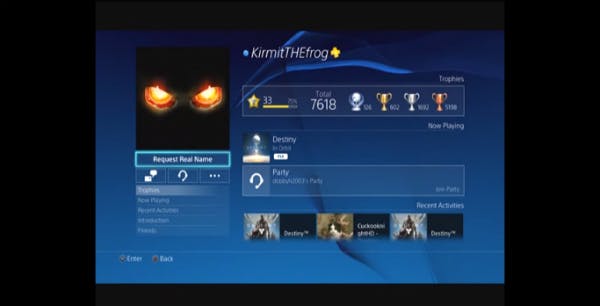 Sure, this guy looks legit.

Of course, before comments on the video were closed, the thread was filled with abuse hurled in Henry’s direction for having made a really bad decision.

The story broke wide enough within the Destiny community that developer Bungie addressed the incident in a weekly update published on the Destiny blog on February 19. The next day, Game Informer’s Mike Futter reported that Henry had been introduced online to his eventual assailant through a member of Henry’s gaming clan.

Now that the PlayStation Network name of Henry’s assailant is public, the owner of the account has started to receive online threats from other gamers. It turns out that the owner of the KirmitTHEfrog PSN account, identified as “Adam,” had also been taken for a ride and wasn’t actually at fault.

The online abuse against Adam’s account was so bad that Adam’s mother contacted Sony for help in dealing with the worst of the bunch, and she also reached out to Futter to explain that her son was not at fault. Someone visiting Adam’s home, a friend of a friend, had been pulling the strings on Adam’s console and was responsible for deleting all of Henry’s hard work.

Futter finally managed to track down the culprit, a teenager who’s being identified as Chris and who had no idea any of this was even taking place. His actions are tantamount to someone casually tossing a lit match over their shoulder without realizing that a warehouse full of TNT is standing right behind them.

Of course, the harassment suffered by Adam and Henry is nothing compared to the likes of what developers Zoe Quinn and Brianna Wu have been going through at the hands of gamers for months. Wu recently had to cancel her company’s appearance at PAX East out of safety concerns. What this story of Destiny malfeasance demonstrates is just how warped too many perspectives have become within the video-game community.

Most gamers don’t seem to have the wherewithal to speak out when developers like Quinn and Wu face life-threatening harassment, but they do march off to war when someone’s Destiny characters get deleted.