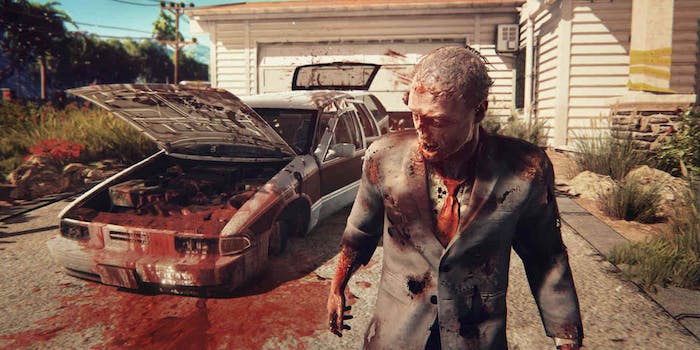 Serious storytelling or a zombie-slaying romp? Apparently it's hard to do both.

Why do we have to be so serious in video games about a horrible world overrun by zombies? Can’t we just enjoy bashing the undead in the head with blunt objects?

Dead Island 2 is being developed by the German studio Yager, best known for 2012’s Spec Ops: The Line, a dark examination of the horrors of war inspired by Apocalypse Now.

According to game designer Daniel Nordlander, with whom we spoke at PAX Prime in Seattle last weekend, Yager tried to stick with its penchant for drama when it began prototyping Dead Island 2.

“Coming off of Spec Ops: The Line, which was quite a serious narrative game, and also seeing the trailer from the first Dead Island, which was really well made, and everyone loved it so much, we thought ‘Let’s be consistent, and go for a more serious tone of the game, because that’s the strength of us as a team, but also what everyone loved about that trailer.’”

Nordlander was referring to the very first trailer for Dead Island, which depicted a family being tragically devoured in a zombie attack. When the game itself failed to deliver on that dramatic promise, some pundits felt taken by a bait-and-switch. The brief controversy was quickly forgotten.

“We had a prototype where we actually had a moral decision, where you were saving this little girl from zombies, and it turns out that she was actually bitten, and she was about to turn into a zombie,” said Nordlander. “And you needed to then choose ‘What do I do? Do I shoot her, or do I try to help her somehow? And that was cool. That was a cool prototype, and it worked quite well. But then we added co-op on top.”

Dead Island included four-player co-op, matching players online based on where they were in the story progression, to let them team up and assist each other with quests, while running around and bashing zombies in the skull.

Dead Island 2 allows for up to eight players to run around throwing and blowing up propane tanks and generally causing mayhem. This chaos was fun as hell in the first game. It stands to reason that it will be just as much fun, if not more so with double the players in the sequel. This does not, however, lend itself to serious storytelling.

“You would have one guy standing there, trying to have a serious moment, and be sad about this girl, and then he had his friend running around in the background, ‘I have a fire-modded axe, and I’m slashing zombies!’” Nordlander said.

Crafting is one of the key systems in Dead Island. Players can build weapons, and modify them with environmental effects. Imagine a machete with flames licking up and down the blade—you get the idea. The juxtapositioning of serious story with flaming weapons was too much for Yager to bear.

“This is not really what we’re after, so we just decided to embrace the fun, and also go completely consistently with the tone in the other direction,” Nordlander said. “So that’s why you see all our heroes in this game embracing the fun and enjoying the slaughter, so to speak.”

The open-world game Day Z depicts a zombie apocalypse along the lines of what The Walking Dead offers us. A handful of survivors fight desperately for dwindling resources, often killing each other in horrible, cruel ways in the process.

Part of what made the first Dead Island refreshing was that the game was ridiculous and madcap, more along the lines of the Dead Rising franchise. When publisher Deep Silver showed off Dead Island 2 at PAX last weekend, we had the chance to play some co-op.

The trailer for Dead Island 2, first revealed at E3 this year, in which a jogger with his headphones on is completely oblivious to his fellow beachgoers behind eaten by zombies behind him, strikes a tone that feels more in line with what we played at PAX.

We asked whether Yager had immediately rejected the idea of a more serious tone to Dead Island 2, when this juxtapositioning between the serious and the ludicrous presented itself, or whether they had tried to make the ideas work together somehow. After all, wasn’t there room for both in a zombie apocalypse?

“It wasn’t like we did a 180-turn like that. It was a natural progression, going more and more into this fun approach,” Nordlander said. “We didn’t want to sacrifice the gameplay for the sake of the story, but rather have the story match what you’re actually doing with the gameplay.”

We also asked whether Yager minded having to make this change from the dramatic narrative the studio is known for, or whether there were benefits creatively to running in a different direction with the design for Dead Island 2.

“It depends on when you ask me that question. If you had asked me at the end of Spec Ops: The Line, definitely it’s refreshing,” Nordlander said. “But if you ask me at the end of this game, I would maybe say I would love to do a narrative-heavy game again that’s super-serious. I think variety is something that every developer wants.”

Dead Island 2 will be released on PC, PlayStation 4, and Xbox One in spring 2015.