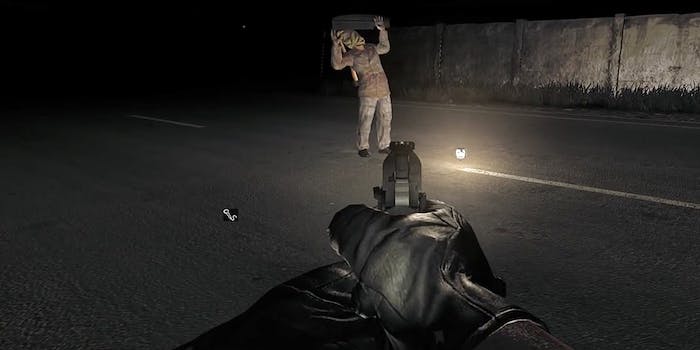 Someone figured out how to make DayZ even more unsettling.

For an encounter to qualify as “creepy” in a game where hiding in terror from running-type zombies and human bandits out to kill you is staple gameplay—well, it has to be something special.

DayZ is a persistent, open world survival game that began as a mod to the ultra-detailed military simulator ArmA II. It takes place in a former Soviet republic named Chernarus, after the advent of a zombie apocalypse.

Players have to scavenge for weapons, ammo, food, and medical supplies, all while avoiding the running-type, deadly zombies that are everywhere. You spawn with nothing in your inventory, and if you die, you lose everything and have to begin all over again.

Running around in the middle of the night with a lit flashlight in DayZ seems crazy. We don’t have any sense of how far away the player in this video was from zombies or other humans. Maybe he knew walking around with a virtual spotlight on his position was safe, for whatever reason.  He is running along a road, however, which means he’s also in zero cover.

When he sees yet another player walking along the same road with a lit flashlight, that’s creepy enough. Then the encounter turns into something out of a horror story you’d tell kids at a sleepover party.

Reflect on the fact that this is a world where bandits and zombies are everywhere. And now you’re handcuffed. In the middle of the night.

This is why people in DayZ just shoot each other on sight. Better safe than sorry.

DayZ constantly spawns engaging tales of human drama because the game is so desperate. Losing all your gear after weeks or months of successful scavenging can be devastating for a DayZ player.

That guy in the video who winds up handcuffed? He is screwed.