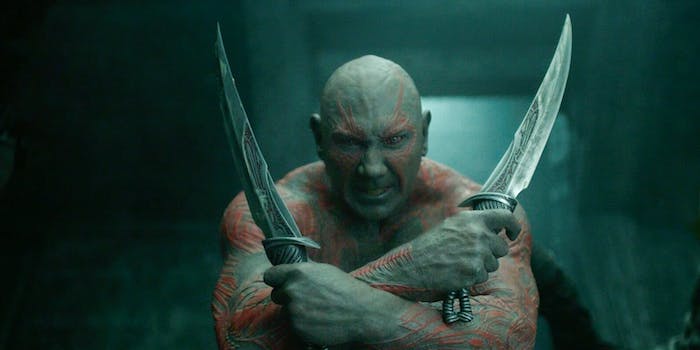 Dave Bautista says he may not return for ‘Guardians of the Galaxy Vol. 3’ after all

He's still not happy with Disney.

In the wake of James Gunn‘s firing as Guardians of the Galaxy director, actor Dave Bautista has been one of his most vocal supporters. Along with signing the cast’s open letter asking Disney to reinstate Gunn as director, he threatened to quit if the studio dumped Gunn’s script. Now, he’s suggesting he may leave the franchise either way.

With no director and possibly no script, Guardians of the Galaxy Vol. 3 has been put on hold. It was originally slated for a 2020 release.

Speaking on The Jonathan Ross Show, Bautista dropped more hints that he might not return to the franchise:

“It’s a bittersweet conversation. No – it’s a bitter, bitter conversation, because I’m not really happy with what they’ve done with James Gunn. They’re putting the movie off. It’s on hold indefinitely. To be honest with you, I don’t know if I want to work for Disney… I’ve been very vocal about the way I feel. I’m not afraid to admit the way I feel.”

It’s extremely rare for an actor to speak out against a major studio like this—especially Disney/Marvel. Only a handful of actors have left the franchise before their time, usually for financial reasons (Terrence Howard) or quietly and uncontroversially (Natalie Portman). In Bautista’s case, he’s making a public protest in support of his friend and former director.

If Bautista does drop out of Guardians of the Galaxy Vol. 3, the studio may decide to recast the character rather than forget Drax’s role entirely. However, would create further controversy around one of Marvel’s most popular franchises.