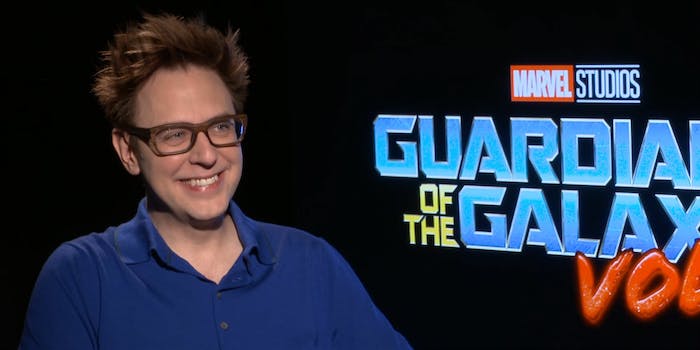 You may have heard the recent news about Guardians of the Galaxy director James Gunn being fired for years-old tweets joking about the topics of pedophilia, rape, AIDs, and other contentious issues. While Gunn did his best to address the issue on Twitter, it wasn’t long before Disney announced that the company had severed ties with the director.

On a surface level, Disney’s actions may be perceived as a justifiable if frustrating outcome in the #MeToo age. What Disney has failed to do is address the fact that the campaign to get Gunn fired came from internet reactionaries and far-right trolls like Mike Cernovich and others. In the process, Disney has appeased a mob that cares little for progressive politics, and instead dips its toes into the waters of progressivism to exploit the past mistakes of people it deems the enemy.

Mike Cernovich, for those who may not know, is a conspiracy theorist turned MAGA hat-wearing Donald Trump supporter turned conspiracy theorist again. Cernovich started as an alt-right self-help columnist, but his most prolific campaign was the #PizzaGate conspiracy that posited that members of the Democratic party were involved in a child sex trafficking ring with no evidence except for a number of emails from Hillary Clinton campaign manager John Podesta ordering pizza.

The ordeal ended with a man carrying a rifle into D.C.-based Comet Pizza demanding to see the supposed children being held hostage in a basement that physically never existed.

Cernovich also trafficks in dangerous rhetoric regarding the culture of rape and sexual assault that has spurred the #MeToo movement.

“Rape requires the use of force, and ‘date rape’ does not exist at all as all rape is rape,” Cernovich wrote in a now-deleted blog post. He also wrote “Do a Google image search for ‘lions mating.’ That’s basically rape and it’s also the natural form of sex” in a 2013 tweet. Cernovich himself was accused of rape in 2003, but charges were later dropped.

Cernovich’s profile became so tied to internet harassment, the alt-right, GamerGate, and more incendiary rhetoric that the Southern Poverty Law Center has dedicated an extensive page to his history. GamerGate is a hate group that aimed to expel women and minorities from the video game industry, all under a cover of investigating “ethics in games journalism,” in 2014.

It was Cernovich’s tweets and subsequent 20-minute rant on the issue of James Gunn that spurred far-right Twitter to action.

What does this all mean for Disney and James Gunn? It means that the primary actors behind drawing increased attention largely weren’t feminists, social justice advocates, or people looking to expunge Hollywood of sexism. It was the actions of the far-right Twittersphere, acting in bad faith, that raised the profile of tweets made years ago. Never mind the fact that Gunn had become one of the far-right’s favorite whipping boys for his numerous anti-Trump tweets.

For more proof, you need look no further than what Cernovich is doing Saturday to understand that his campaign isn’t against the likes of Ted Nugent, Harvey Weinstein, or Donald Trump. Who did Cernovich single out the day after successfully expelling Gunn from Disney? He targeted comedian Michael Ian Black, another outspoken anti-Trump voice on Twitter. Here’s what Cernovich posted:

Wow. This is quite a comedown from James Gunn. Mike, we’ve had this conversation before. There’s a qualitative difference between a comedian making jokes – even offensive jokes (me)- and somebody being charged with rape in 2003 (you). https://t.co/b5U7ITKkU7

This, of course, feeds back into the popular alt-right narrative that the liberal media is out to crush them. Here’s Cernovich on Saturday morning:

Let’s get one thing straight: Disney had to have known about Gunn’s past tweets. The man directed Troma films, known for their copious amounts of gore, violence, and sexuality. That’s not something that escapes the labyrinth of lawyers for the company that owns half of Hollywood.

Disney willingly invested in a man it knows created art that was controversial for controversy’s sake, but it then succumbed to a man and a hate campaign that actually believes rhetoric like “Rape via an alpha male is different from other forms of rape.” If this situation sounds similar to the one that caused Roseanne Barr to lose her show, it’s not. Barr’s racist statements came while the show was actively being promoted and aired on television, not years before.

And this is how many of these internet hate campaigns work. They’re looking to expunge specific groups of people (often women, the LGBT community, or non-white) from specific industries by throwing enough toxicity at the wall and seeing what sticks. While many of these efforts have failed, it only takes one for the mob to be re-energized.

Cernovich’s own tweet about Michael Ian Black includes jokes made from as early as 2009, all in order to prove that there is a child sex ring being perpetuated by liberal Hollywood elite. From #PizzaGate to #GamerGate, it’s always been about finding enough nuggets of controversy to fire up the fears of major corporations or organizations that employ liberally minded people.

We saw this just a few weeks ago with the firing of Jessica Price, a writer for the popular multiplayer online game Guild Wars 2. After Price rebutted a Twitter follower for inserting himself into a conversation about how she should do her job as a writer, the far-right Twittersphere made it their mission to flood game developer ArenaNet with bad faith complaints about what was ultimately a meaningless interaction. To add fuel to the fire, game developers reported that their companies had received stock letters complaining about certain employees, but many failed to remove the text “FEMALE NAME” from their letter, again showing that it’s always been about punishing specific groups.

Maximize a minuscule error, incite the hoard, and watch as corporate lawyers flail in the wind to stamp out the fire rather than protect their employees from bad-faith actors.

What’s Disney to do about all this? The first step would be to acknowledge that its actions have incited such a group. Its monopoly on geek culture media is just as affected as the games industry, and it would show other actors and industry workers that minor mistakes aren’t grounds for immediate removal, especially if the outcry comes from bad-faith actors with no agenda beyond punishing individuals who speak out against bigotry or certain brands of politics.

This action by Disney also further legitimizes people like Cernovich, who have built a career out of internet reactionary politics and alt-right bigotry. Now even career politicians like Sen. Ted Cruz (R-Texas) have joined the fray, using the moment to further an anti-liberal Hollywood agenda, all based on zero evidence that Gunn ever took his words beyond (bad) jokes.

“If these tweets are true, he needs to be prosecuted,” Cruz wrote.

Wow. These #JamesGunn tweets are just horrible. Child rape is no laughing matter. As Texas SG, I handled far too many child sexual assaults. Truly evil. I’m glad Disney fired him, but if these tweets are true, he needs to be prosecuted. pic.twitter.com/1IgHC18J4x

Prosecuted for what? For making awful jokes? Even if Cernovich is destined to spend his life in a gutter of YouTube and Twitter politics, Cruz is a man who wields power, who knows how to use that power, and who has enough clout that a man could see serious legal action against himself for old, bad jokes.

Actor Dave Bautista, who plays Drax the Destroyer in Guardians of the Galaxy, is the only major person connected to the franchise to publicly comment, stating: “James Gunn is one of the most loving, caring, good natured people I have ever met. He’s gentle and kind and cares deeply for people and animals. He’s made mistakes. We all have. I’m NOT ok with what’s happening to him.”

Disney knows what it’s done here, but it’s not clear if it even wants to think about the long-term implications. Companies are far more comfortable skirting a PR hassle to maintain their public image than protecting the employees who make their company a bright spot for undervalued audiences. If Disney thinks it’s heard the last of far-right activists stirring up dirt against employees that don’t deserve it, then it’s being foolish, and we may be fools for allowing it to continue.