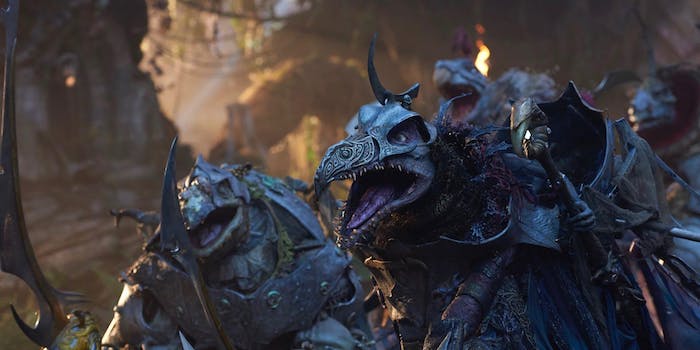 The end of ‘Dark Crystal: Age of Resistance,’ explained

In the post-credits scene, we see the beginning of the end come to life before our eyes.

The Dark Crystal: Age of Resistance introduced us to an expansive and magical world on the brink of civil war, but amid the destruction of Thra over the Skeksis’ attempt to gain immortality and the lies to cover that up remained glimmers of hope, as well as a game-changing clash to end the first season season.

The battle at Stone-in-the-Wood, the home of the Stonewood Gelfling clan, was a long time coming. Rian, Brea, and Deet (Taron Egerton, Anya Taylor-Joy, and Nathalie Emmanuel, respectively) spent the better part of Age of Resistance attempting to convince the other Gelfling that not only did their Skeksis rulers want to drain them for their essence but that that the Gelfling needed to rise against the Skeksis to save Thra. They were branded traitors and liars by their own kind, but they soon saw for themselves the destruction that the Skeksis had wrought.

In what looked to be a last-ditch effort by the Gelfling, Rian formed the Dual Glaive, a double-bladed sword that his father once wielded in the Arathim Wars. That sword, according to the Heretic and the Wanderer—a linked Skeksis and Mystic, respectively, who live together at the Circle of the Suns—can help the Gelfling defeat the Skeksis.

“[T]here is hope, for we have glimpsed into the future and seen our fate lies in the hands of the Gelfling…” the Heretic (Andy Samberg) tells Rian, Brea, and Deet while putting on a puppet show about the legend. “The Skeksis will stop at nothing to preserve their dominion over Thra. And so, we forged our knowledge into a blade… Cast in the deepest fires of Inner-Sun, it carries the spirit of Thra. And, when wielded by Gelfling, holds the power to unite the Seven Clans and defeat the Skeksis.”

With the Dual Glaive in hand, Rian broadcast a message to the surviving Gelfling through the flames that linked all seven Gelfling clans: Now was the time to fight.

The end of Dark Crystal: Age of Resistance 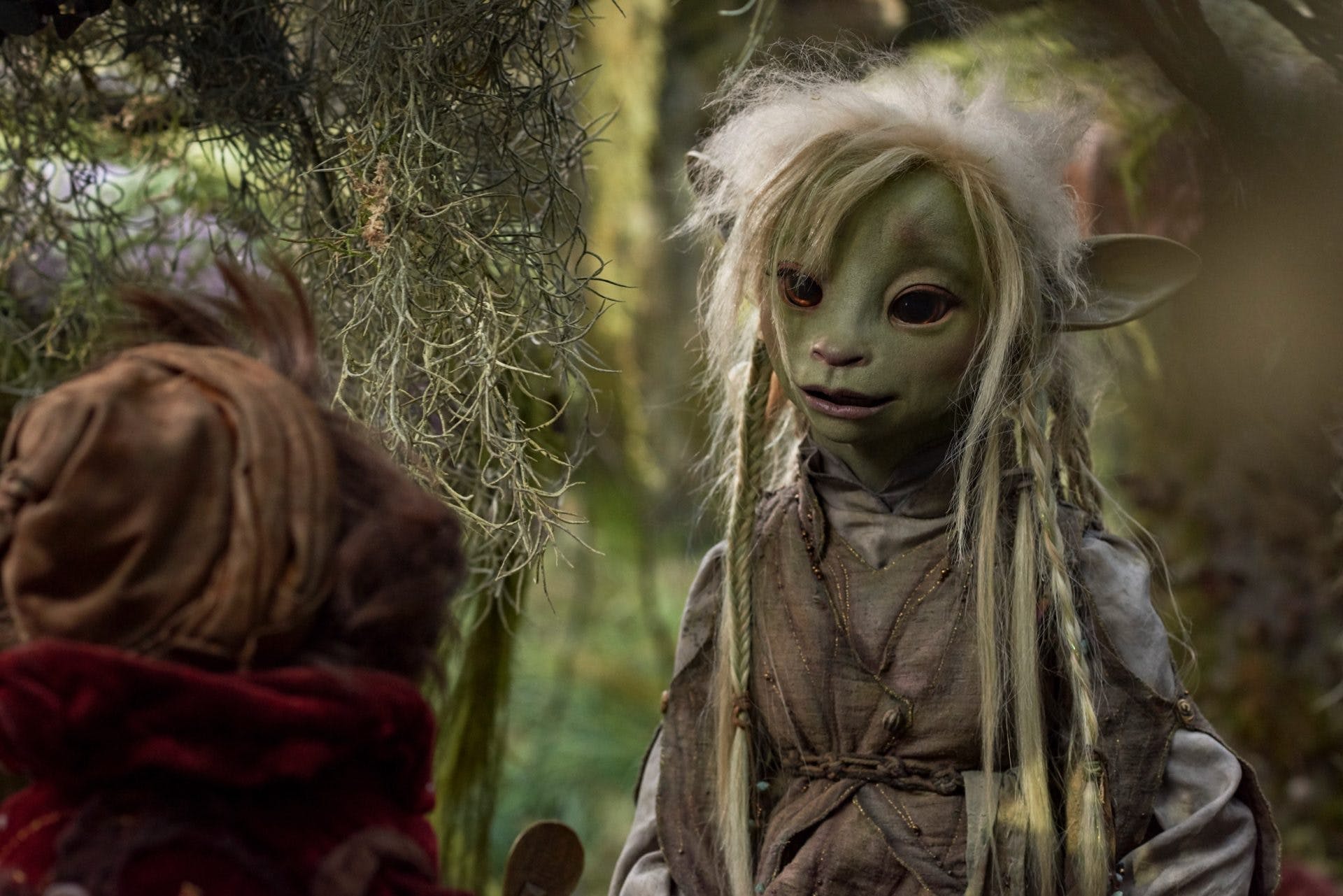 This wasn’t the first time that Stone-in-the-Wood was the centerpiece for a big battle, but this one had much higher stakes for all Gelfling. The Gelfling, who teamed up with the Arathim, came prepared, and Rian—with the Dual Glaive in hand—challenged the Skeksis to a fight, which the General took up.

Although things looked dire, it didn’t take long for Rian to gain the upper hand as he stabbed the General with the Dual Glaive, watching in awe as the crystal in the sword hilt absorbed some of his essence. Rian refused to kill him, but the General wasn’t long for this life; a short time later, Chamberlain gutted the General himself.

From there, the battle broke out in full with Maudra Fara (Lena Headey) becoming one of the battle’s many casualties. And each time that all seemed lost for the Gelfling, the tides turn in their favor.

The first time, the Hunter (newly revived by Mother Aughra’s sacrifice) has Rian in his grasp. But the Archer—the Mystic who’s connected to the Hunter—can sense that the Gelflings are in danger through his connection to the Hunter and sacrifices himself. Because the two are linked, they both die from the Archer’s actions. (As the film revealed and Age of Resistance solidified, Skeksis and Mystics are two halves of a different being known as the urSkeks.)

The Hunter’s death also results in Mother Aughra’s rebirth after giving up her life to revive the Hunter. And at that moment, the rest of the Gelfling arrive at the battle, having heard Rian’s message and ready to fight.

It’s at this moment the Emperor decides to unleash the Darkening onto the Gelfling, wiping several of them out until Deet steps in to absorb all of the dark energy. She’s able to turn that dark energy back toward the Skeksis and take out the Collector (Awkwafina) before the Skeksi retreat. But Deet, who’s now corrupted by the Darkening herself will never be the same, and she retreats further into the forest while the unified Gelfling forces celebrate their victory.

But the key to taking out the Skeksis isn’t the Dual Glaive itself, as Brea discovers. It’s the crystal shard found in the sword—the same one that a Gelfling named Jen will eventually stick back into the Dark Crystal.

But the end of the Gelfling might closer than we think 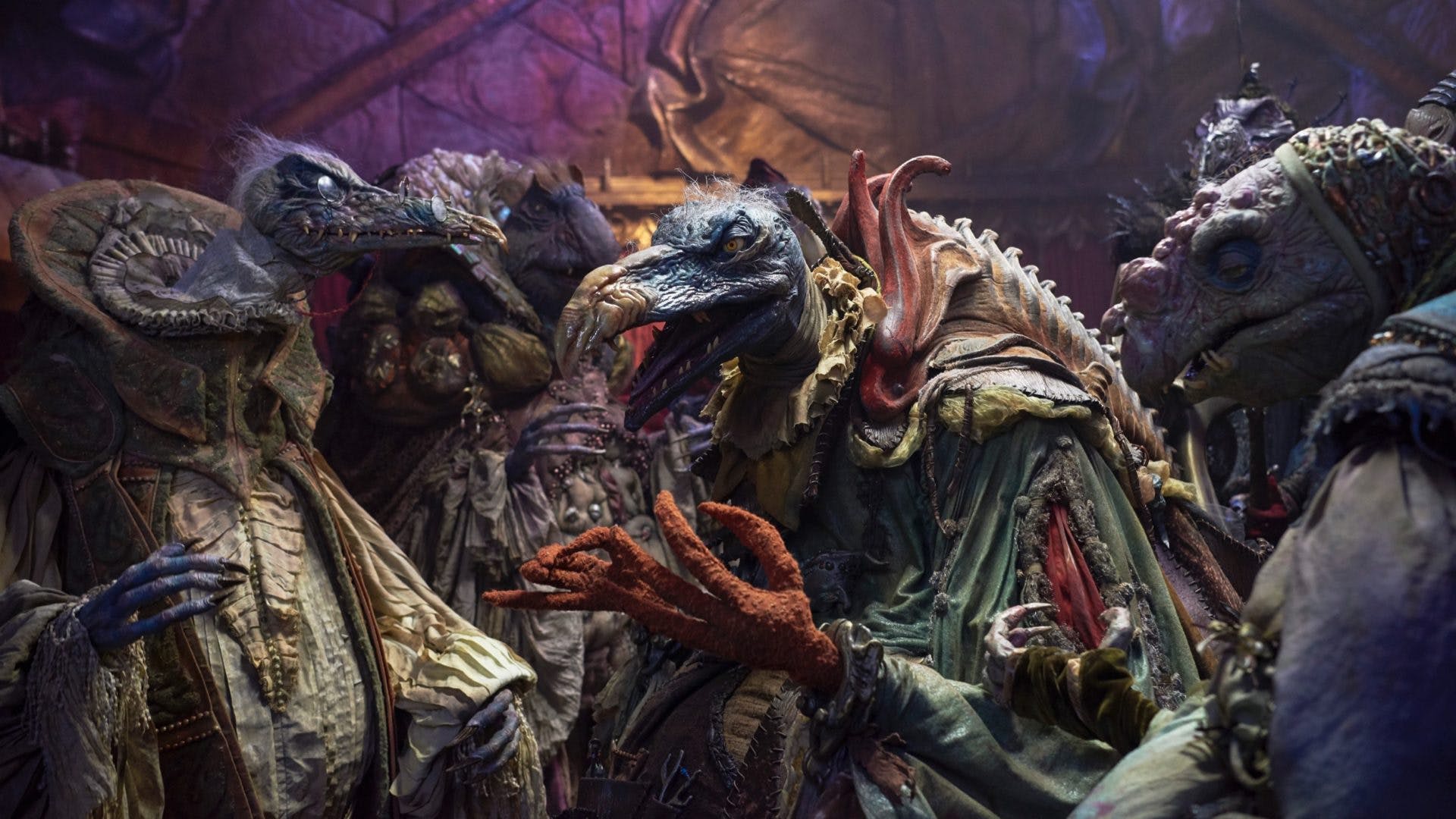 Throughout Age of Resistance, it’s easy to forget that we’re more than familiar with how this story ends. No matter how many battles the Gelfling might win, we know they lose the war. And in the post-credits scene for Age of Resistance, we see the beginning of their end come to life before our eyes.

The Scientist (Mark Hamill) spent the better part of the episode attempting to build a new army for the Skeksis by using an Arathim carcass, but it wasn’t until his two Gruenak slaves attempted to revolt that he found his stroke of genius. He merged the two creatures to create the Garthim, which combines the names of the two creatures into its own portmanteau and shows it off to the Skeksis after they return from battle.

“My lords, my lords, all is not lost,” the Scientist tells them. “I have found a solution to all our problems: An ingenious combination of Gruenak and Arathim. I call it… Garthim!”

Does that gigantic crustacean look familiar? It should. It’s the same creature that chases Jen and Kira through Thra in The Dark Crystal—but they’re also responsible for eventually wiping out nearly all of the Gelfling. We learn this fact from Aughra herself, who likely had some inkling of what happened.

“But Gelfling all dead!” Aughra says in The Dark Crystal when she meets Jen for the first time. “Garthim kill them all! You can’t be Gelfling! You look like Gelfling… smell like Gelfling… maybe you are Gelfling!”

We don’t know how long Age of Resistance will run or if the show will take us all the way to the downfall of the Gelfling; as far as we know, the Wall of Destiny had yet to be created. But as Age of Resistance has already demonstrated, it’s not afraid to kill a lot of characters, and chances are very likely that we’ll see more than a few Gelfling falling at the claws of the Garthim in season 2.