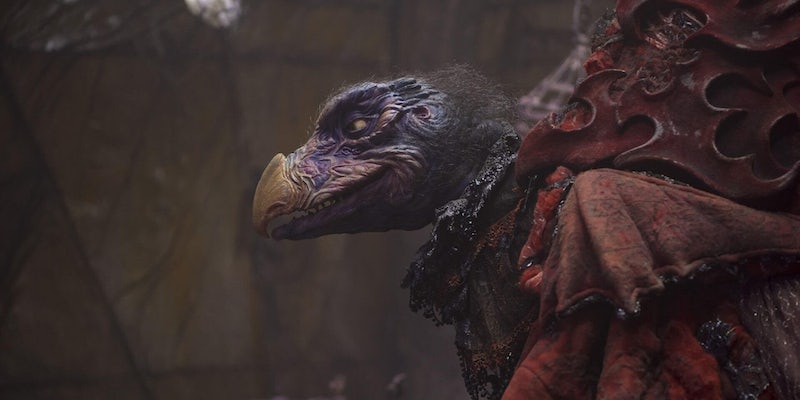 The 1982 film originally had the Skeksis speak in an alien language of shrieks and squawks.

The Dark Crystal is one of those movies that’s nominally suitable for kids but is famous for being memorably creepy. The evil Skeksis have scared the crap out of younger viewers since the 1980s, and now the prequel series Dark Crystal: Age of Resistance is here to freak out a new generation. Honestly, we wouldn’t have it any other way.

In the original movie, the Skeksis look like the reanimated corpses of a vulture-lizard hybrid. With sharp beaks, rheumy eyes, mottled skin, and claw-like hands, they really do look like creatures that kept themselves alive for centuries by sapping the life-force from innocent victims. Their uniquely disgusting appearance did a lot to cement their role as memorable villains, but if you can believe it, they might have been even more disturbing. In an earlier version of the movie, the Skeksis spoke in an alien language of squawks and growls.

Loosely inspired by ancient Egyptian and Greek, the Skeksis language was created by renowned fantasy author Alan Garner. This idea went as far as being recorded and shown at test screenings, but audiences deemed it too weird and confusing. Admitting defeat, the filmmakers re-dubbed the dialogue into English for the theatrical release. If they’d kept the original version, the Skeksis’ scenes would have sounded like this:

Much of The Dark Crystal’s staying-power is tied up in its intrinsic weirdness. There aren’t many feature films starring an entire cast of puppets, and this one introduced a complex fantasy world with an extensive mythology and ecosystem of fantastical creatures. It draws a lot of inspiration from other sources (particularly Tolkien, European fairytales, and the New Age philosophical text Seth Material), but like Star Wars, it combined its influences to create a defining example of its genre. The Skeksis language was exactly the kind of confidently bizarre creative choice that made The Dark Crystal a cult favorite among fantasy fans.

With a ten-episode runtime, The Dark Crystal: Age of Resistance digs deeper into the complex worldbuilding of Thra, introducing the seven Gelfling clans, a bunch of new creatures, and a deeper look at the politics and mythology of The Dark Crystal. It also co-stars a Podling character who speaks broken English, a remnant of Jim Henson’s ambitious plans in the 1982 movie. While Podlings have more of a background role in the film, they do actually speak a constructed language based on Serbo-Croatian, which you can hear in this Podling party scene.